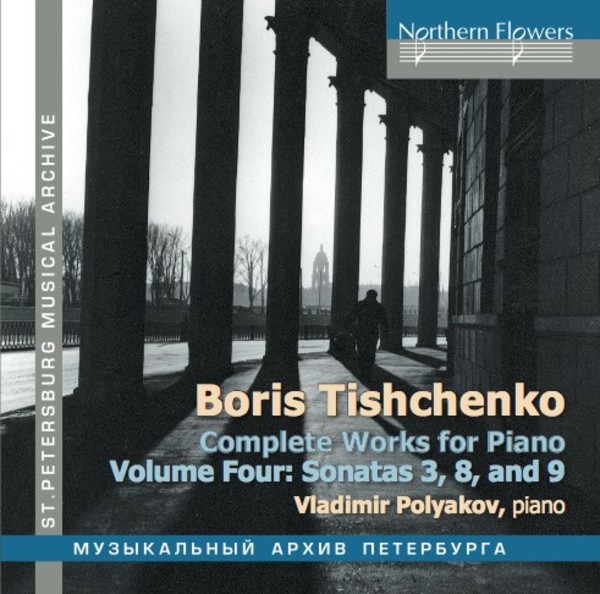 The works of Boris Ivanovich Tishchenko (1939-2010) have a unique position in the panorama of todays art. There is no need to remind how difficult the development of music in the 20th century was. Probably the greatest trial it had to pass was the urge towards radical innovations, which often led to the nearly complete loss of an individual style. Tishchenkos music has a rare quality  it is instantaneously identifiable, literally by the first notes and bars. They form a world imperiously establishing its own laws and demanding maximum concentration of thought from the listener. Integrity, scale of artistic issues, and finally constant feeling of artists responsibility  such are the key points of the composers personality.
Tishchenko wrote the Third Piano Sonata in 1965, dedicating it to his piano teacher Vera Mikhelis. This large-scale four-part composition resembles a symphonic cycle, and overcomes its traditional composing patterns at the same time.
The completion of the Eighth Sonata (1986) is a period of the composers intense turning to chamber music. At that time, he created the Piano Quartet and the vocal pieces Last Will and To My Brother. However, the Eighth Sonata (dedicated to Petersburgs well-known composer Gennady Banschikov) displays not the chamber features of the genre but rather organization of a close-up form, and the instrument interpretation itself.
Tishchenko created the Ninth Sonata in 1993, dedicating it to Petersburgs famous pianist Vladimir Polyakov, who has performed many piano works of the author. The composition of this sonata formally resembles a suite cycle, with three parts having quite well-defined reference points: Nocturne, Pastorale, and Barcarolle. Alongside with this, its drama is built upon a progressive advance of a sonata-symphony type, only that it is free of acute conflictive outlines.
Vladimir Polyakov is a graduate of the St. Petersburg Conservatory where he studied with Professor M.Y. Khalfin. Today, he is Associate Professor of the St. Petersburg Conservatory. His vast repertoire comprises the most important and complicated pieces of the world piano music.
Leonid Gakkel, musicologist and piano performance researcher, commented on Vladimir Polyakov, His performance is exceptionally harmonious and serious, it has style, and is full of deep respect to the music performed and to its listeners. No wonder that with such merits, Polyakov is good in modern repertoire. With the pianist, this repertoire loses any excessive avant-garde and acquires a noble character of classics. The musician is highly responsible for his skill and for his art.
The performance of piano sonatas of Boris Tishchenko is woven through Vladimir Polyakovs artistic career. The sonatas recorded on this disc are the outcome of many years of work, a result of insightful artistic comprehension of music congenial to him. In his turn, Boris Tishchenko in an interview called this focused attention of the pianist to his music a gift of fate.
Recordings of the St. Petersburg Recording Studio in May-June 2005 at the St. Catherina Church