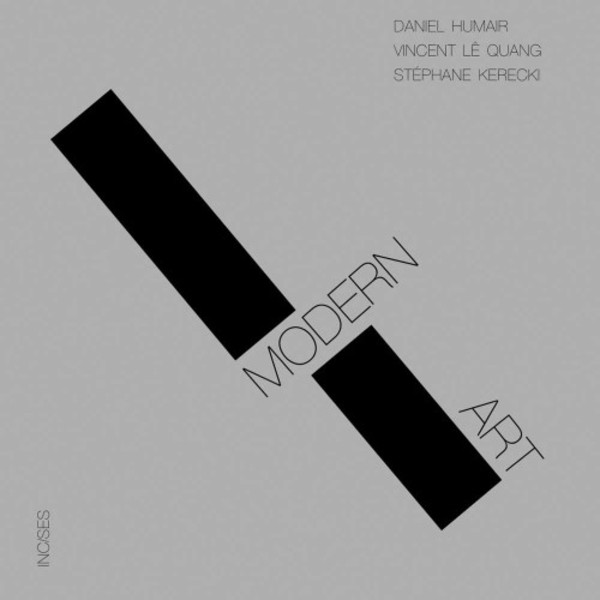 This Modern Art CD project is an invitation to discover new ideas, and these pieces of music by Vincent Lê Quang, Stéphane Kerecki and myself are not really tributes ; I prefer to think of them in terms of correspondences, parallel ideas, encounters, affinities, out-of-the-ordinary phenomena. Weve chosen several 20th century painters to give us one of two possibilities : either we already had such and such a composition in our pack that matched up with the pictorial world of a certain artist, or weve written an original composition inspired by an artists work. All this in spirit rather than literally. For Modern Art is about relationships : between neighbours or others close to us, members of the same family, free associations. Im both a musician and a painter, but Im not trying to establish any direct link between these two art forms ; if a link does exist, its in the colours of both, but this is not to be taken at face value, as in  Red is for Sonny Rollins, blues for Bill Evans  that would be all too easy ! Jackson Pollock for White Light, that painting of his on the cover of Ornette Colemans album Free Jazz. Alan Davie, because he was a musician, a tenor saxophonist in fact, before becoming a painter. Alan was a close friend of mine and his painting had a major influence on me. Bram Van Velde, whom I knew a little, because François Jeanneau composed a lovely number as a tribute to him that we recorded with the Humair/Jeanneau/Texier trio in 1979. He was a great colorist with a strong personality. Pierre Alechinsky, because hes a friend whos close to jazz (Benoît Quersin and Chet Baker lived at his place during the 50s and he was also behind the cover of one of Michel Portals albums, Dejarme Solo !). Alechinsky is a great artist and great master of colour with a superb painters touch. Hes also a phenomenal printer, maybe one of the greatest. He has a keen aesthetic sense where pictures and images are concerned and knows all the secrets of lithography and etching. Vladimir Velickovic and Yves Klein, because I worked for some films about both of them. Cy Twombly, because he was a decisive influence in my early painting days. Jean-Pierre Pincemin, because he was another friend who was also a great jazz-lover. Paul Rebeyrolle, because he and I were close to each other.  Daniel Humair