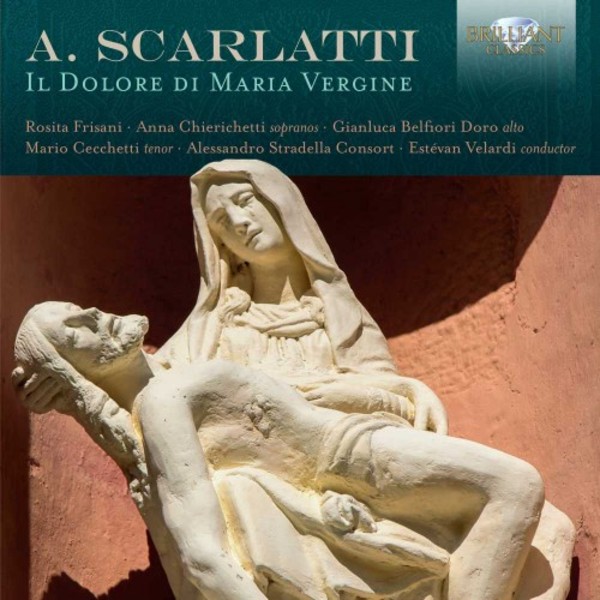 A Lenten oratorio in the Italian tradition of sacred opera, Il Dolore di Maria Vergine is widely held to be the outstanding masterpiece in the genre by Alessandro Scarlatti. Structured in two extended parts, it assigns roles to the Virgin Mary, St John, Nicodemus and to a High Priest named Onìa. The challenge taken on by the composer and his anonymous librettist early in 1717 was to make a mere four characters effective as vehicles for conveying the drama of the Passion, moving as Bach does from the capture of Jesus in Gethsemane, to his interrogation by Pilate, his scourging and crowning with thorns, his journey to Calvary and his crucifixion and death.

As one of the foremost scholars of Scarlattis music, Estévan Velardi believes this work even to stand alongside the Passions of Bach, for its grave intensity, nobly sustained form and generous variety of expression. Velardi produced the authoritative critical edition of the score; with the Alessandro Stradella Consort, he has notched up an impressively broad discography of unjustly neglected Italian Baroque masters, as Gramophone remarked in 2010 when reviewing a later Brilliant Classics album of Scarlattis San Filippo Neri (BC94037).

Recorded in 2001 and first released by Bongiovanni, this recording of Il Dolore di Maria Vergine was welcomed by the Italian Musica magazine with a ringing endorsement of its virtues: The orchestra is precise, and in full sympathy with the Scarlatti idiom; outstanding among the instrumental soloists are the trumpet player Gabriele Cassone, the violinist Fabrizio Cipriani and the members of the notably rich continuo section. All the vocal soloists give fine accounts of themselves: Rosita Frisanis Maria is always focused and involved in the drama; as Nicodemus, Gianluca Belfiori Doro sings with an unaffected countertenor voice, rich in nuance; Anna Chierichetti combines secure technique with heartfelt expression, as does Mario Checchetti, who captures the many facets of the complex role of Onìa.