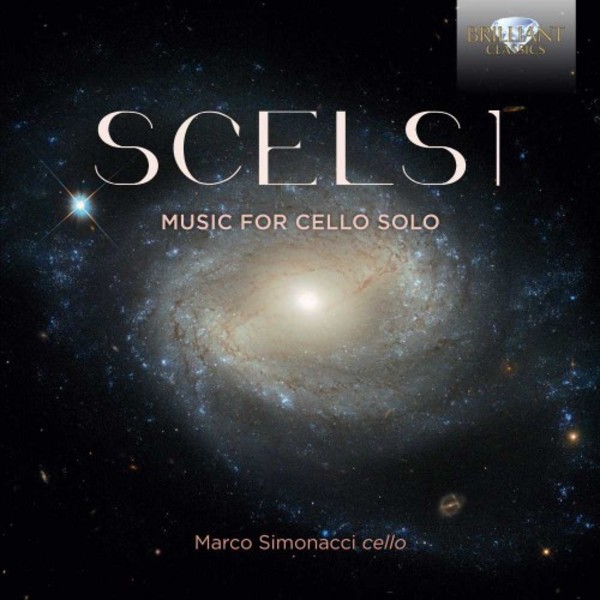 An aristocratic background, Eastern philosophies, private study with Modernist luminaries of the early 20th century and a determined pursuit of solitude: all in their ways contribute to the unique soundworld of Giacinto Scelsis music. Despite shunning personal publicity, however, the composer surrounded himself with friends and favourite performers, among them the American‐born, Dutch cellist Frances‐Marie Uitti who came to represent Scelsi on the world stage in his latter years. To her care he entrusted Trilogy, which forms the main work on this album of solo cello music.

Using a limited tonal range, Scelsi concentrated on continually varying timbre and density: the effect is an exquisite intensity of expression, often hanging by a thread between sound and silence, between pitch and noise, yet always, palpably heading towards a visionary destination. Comprising Triphon (1956), Dithome (1957) and the Sanskrit-inspired Ygghur (1965), the Trilogy is still to some extent dependent on the Expressionist language he had learnt from disciples of Schoenbergian serialism, yet already personal to him, and now a classic of 20th‐century solo cello repertoire. The album is completed by the two fleeting movements of Voyages from 1974, which deploy disembodied harmonics and other techniques familiar from Scelsis music such as tantalisingly slow, microtonal glissandi.

This valuable release follows the Brilliant Classics release in 2016 of the composers music for flute (BC95039), which attracted wide critical attention for dauntless performances from Claudia Giottoli (The Guardian), and the physicality and the voluptuousness of the recording: it feels real, not too manicured and exactly right for a composer who was obsessed by the holistic nature of tone. Marco Simonacci has contributed several acclaimed recordings to the Brilliant Classics catalogue including the cello music of Scelsis contemporary and brother in sound-exploration, Morton Feldman (BC9401).