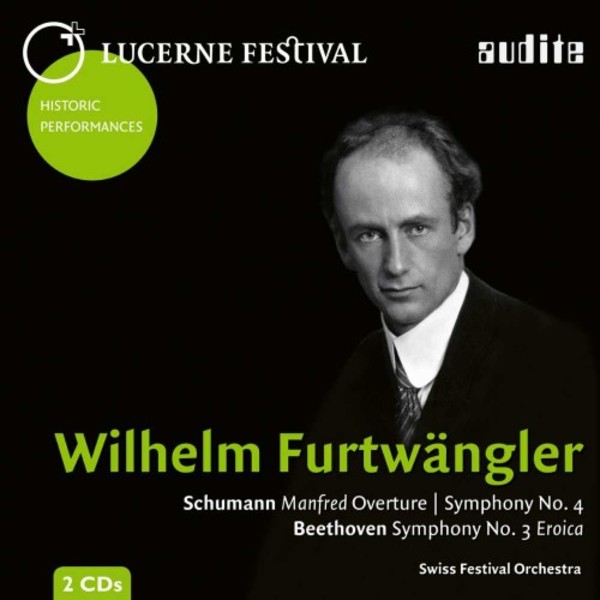 A sensational archive discovery and two of Furtwänglers all-time favourites: a live recording of the Manfred Overture (1953), presumed lost until recently and now released for the very first time, alongside Beethovens Eroica and Schumanns Fourth Symphonies, remastered for the first time using the original tapes.

Wilhelm Furtwängler, invited to Lucerne for the first time in 1944, was one of the defining artists of the Lucerne Festivals first decades. From 1947, he performed in Lucerne each summer (with the exception of 1952, when he had to cancel due to illness) until his final concert in August 1954, a few months before his death (recording also available in the Historic Performances series: AUDITE95641). In total, Furtwängler conducted eighteen of the festivals concerts, sixteen of them with the Swiss Festival Orchestra who also played on 26 August 1953.

Furtwänglers motto was be faithful to the spirit rather than faithful to each note. This Lucerne recording demonstrates his methodical approach, especially by means of a precisely calculated tempo architecture: Furtwänglers seemingly arbitrary tempo modifications hold structural significance, dynamising the musical form. Illustrated with numerous photos from the festivals archive, the 32-page booklet in three languages discusses this approach, whilst also referring to other famous recordings, such as Furtwänglers studio recording of Schumanns Fourth Symphony with the Berlin Philharmonic, made only a few months earlier.