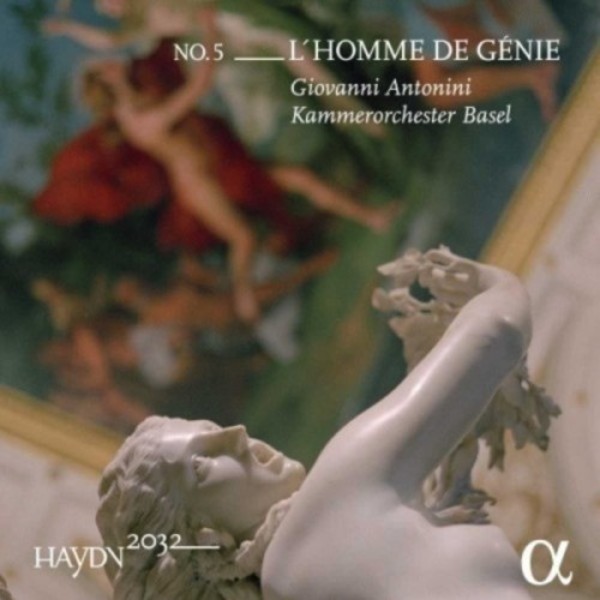 Haydn2032, the ambitious project of recording the complete symphonies of Haydn, has been placed from the start under the artistic direction of Giovanni Antonini, with two ensembles, Il Giardino Armonico, which made the first four volumes, and the Kammerochester Basel, to which this fifth volume and the next two are assigned. Another characteristic of the edition is that each time Haydn is set in perspective with another composer; here it is Joseph Martin Kraus (1756-92): Kraus was the first man of genius that I met. Why did he have to die? It is an irreparable loss for our art. The Symphony in C minor he wrote in Vienna specially for me is a work which will be considered a masterpiece in every century, said Haydn in 1797. Though he long remained forgotten after his death, Kraus made an active contribution to the movement of poetic renewal called Sturm und Drang or Geniezeit (time of genius) because such artists as the young Goethe broke free of all tradition to follow their hearts alone. When Haydn called Kraus homme de génie, in French, he probably had this context in mind. The two composers had met in Vienna in 1783.

Giovanni Antoninis ambitious project to record all of Haydns symphonies by the time of the composers tercentenary year in 2032 is still in its early days, but is already laying claim to being the most fascinating traversal of this genre-defining corpus yet to emerge on disc. The first four volumes have all been with Antoninis own period-instrument band, the superb Il Giardino Armonico. Now, for the fifth volume, duties devolve to his other orchestra, the Kammerorchester Basel, of which he is Principal Guest Conductor. Anyone who knows this orchestras near-complete Beethoven cycle on Sony, also with Antonini, will need no reminding of their excellent qualities. Playing on period instruments, they are both technically immaculate and hugely characterful, not least in the vital woodwind section. They will be sharing the rest of the Haydn cycle with Il Giardino Armonico, and on the basis of volume 5, the project could not be in better hands.

Where other Haydn cycles have grouped works either numerically or chronologically (not always the same thing in the often misleading numbering system), Antonini chooses a theme for each disc. For this one, its Lhomme de génie: the man of genius  an entirely appropriate description of Haydn that particularly applies to the two main works here, Symphonies nos. 80 and 81. These are two of a group of three symphonies that he wrote in 1784 with a view to the international market that his new contract with Prince Nikolaus Esterházy had granted him permission to enter. By any standards these are impressive works: no.80 in D minor seems initially to inhabit the explosively impassioned Sturm und Drang world of Haydns middle period symphonies, but that opening soon gives way to a strikingly lopsided Ländler, and the fusion of emotional volatility with characteristically Haydnesque wit and humour is a hallmark of the work as a whole, not least in the minor-key Minuet, where the deliciously inflected major-key Trio even incorporates a line of Gregorian chant on oboes and horns. The brilliant Finale teases the audience (and the musicians) with a play of syncopations that makes the actual beat extraordinarily elusive.

The G major Symphony, no.81, is deceptively suave, but immediately veers away from the tonic key in a passage that earned the admiration of the late Charles Rosen in his seminal book The Classical Style. The Andante slow movement is a beguiling siciliana of a type that Haydn made something of a speciality, while the Minuet has a rustic tang that is perfectly captured by Antonini and his players, never descending to the sort of coarseness that too often marred Nikolaus Harnoncourts Haydn performances. The bassoon-led Trio has a particularly Austrian feel to it, while the Finale returns to the urbanity of the opening movement. In both works, Haydn stands on the cusp of the greatness that would shortly burst forth in his Paris Symphonies, and Antonini and the Basel players never miss a trick. Even in the three-movement Symphony no.19 in D major (a comparatively unremarkable work according to the Oxford Composer Companion to Haydn), Antonini and his musicians breathe life into the briefest of phrases, shaping the music with an unerring feel for its hidden beauties. These are life-affirming performances, alert, vivacious yet deeply sensitive, and they bode well for future instalments.

The man of genius tagline is actually from Haydns words of tribute to fellow composer Joseph Martin Kraus (1756-1792), who, like his exact contemporary Mozart, died young but not without leaving several works of undeniable greatness behind. His symphonies (which themselves pay tribute to Haydn) are particularly imposing, few more so than the three-movement C minor work included here as one of the related works that make this Haydn cycle so distinctive and fascinating. It is also probably the work that Kraus himself presented to Haydn when they met at Eszterháza in 1783. Kraus spent the height of his career in the service of the Swedish court, and he is sometimes referred to as the Swedish Mozart, but it is the Sturm und Drang mood of Haydns middle-period Eszterháza symphonies that hang over this sombre three-movement work, with a textural density that sets it apart from the other works on the disc. If you dont already know Krauss music, youre in for a treat here, and with so few recordings of his symphonies currently available, this superbly animated performance is an important addition to the catalogue in its own right.

Alphas presentation is as sumptuous as its recording. As with other volumes in this cycle, a selection of photographs complements the central theme: in this case, Stuart Franklins beautifully rendered colour shots of Florentine marble sculptures, including Michelangelos David as a perfect exemplar of Renaissance genius. It all adds up to a tremendously attractive package. When Antonini eventually completes this daunting task  as we fervently hope he will  it will surely be the pick of all Haydn symphony cycles. And, in the meantime, we can savour every minute of his journey.

The Basel Chamber Orchestra present a sound that is a touch sweeter than Il Giardino Armonicos, although that familiar period-instrument spit is still never absent when the Sturm und Drang is turned up to 11. ... The suave No 81 comes off particularly well, while No 80, one of Haydns most eccentric creations, is played straight and comes of all the more witty for it. ... The fourth work is the wonderful C minor Symphony of Joseph Martin Kraus, always worth hearing as perhaps the finest of the Sturm und Drang symphonies not from the pen of either Haydn or Mozart (Krauss exact contemporary, to whom the work was, astonishingly, once attributed).  David Threasher
Gramophone January 2018