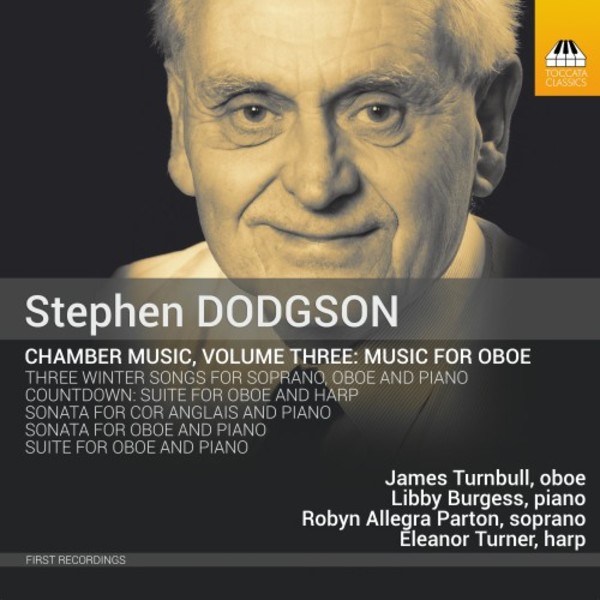 This third album in the well-received Toccata Classics survey of the chamber music of London-born Stephen Dodgson (19242013) focuses on his works for oboe. The works here show a master-craftsman at work: Dodgson fuses a Baroque sense of clarity, a modern English elegance that has echoes of Britten and Tippett and a hint of eastern European mystery. His writing for oboe has a strong sense of narrative, touching a range of moods, from deep emotion to tongue-in-cheek fun. A further album of music for wind instruments is in preparation.

James Turnbull has dedicated much of his performing life to promoting and extending the oboe repertoire. He has performed frequently throughout the UK and Europe, including solo recitals at the Wigmore Hall and live broadcast on BBC Radio 3. He has appeared as a soloist in numerous UK festivals.

The pianist Libby Burgess took a first in music at Oxford, where she was the first female organ scholar at Christ Church Cathedral, before specialising in piano accompaniment with a postgraduate scholarship at the Royal Academy of Music. Here she was awarded numerous accompanist prizes. She gives masterclasses at schools and universities across the UK, and until 2015 was Head of Keyboard at Eton College.

The lyric-coloratura soprano Robyn Allegra Parton has appeared at the Royal Opera House, Covent Garden, Opera-Comique de Paris and at other European opera houses and festivals.

Eleanor Turner, harp, made her concerto debut aged fifteen, with the Academy of St Martin in the Fields conducted by Daniel Harding and broadcast live on Classic FM.