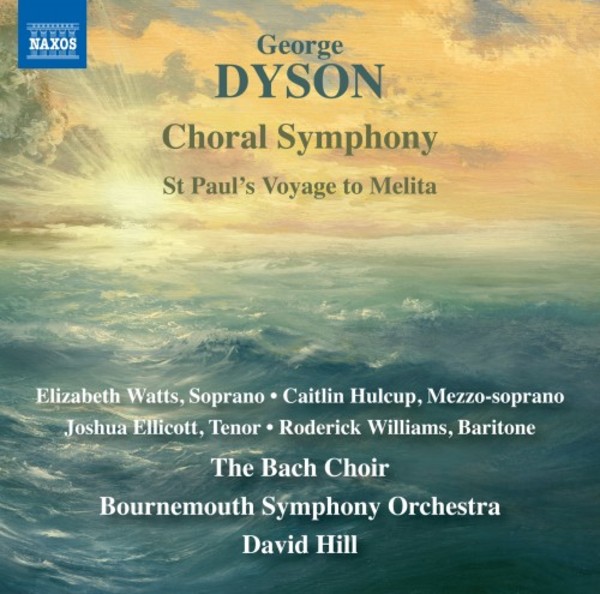 Born into a working-class family, George Dyson (1883-1964) became one of the most important musicians and composers of his day. The previously unknown Choral Symphony was written as an examination work while Dyson was studying at Oxford, and it was only recently discovered at the Bodleian Library. Dyson relishes his dramatic chosen text from Psalm 107 on the expulsion from and homecoming of the Jews to Israel, a narrative that inspires trademark features that would make his later works so attractive. Its seascape finale links neatly with St Pauls Voyage to Melita, another vivid text from which Technicolor musical images are conjured.

The significance of George Dysons music has been re-evaluated since experiencing something of a renaissance from the 1990s onwards, and the finding of an entirely new score, the Choral Symphony in 2014 has been one of the most exciting discoveries of the decade for British music. It was first performed at St Johns Smith Square, London in 2014.

The Bach Choir and Bournemouth Symphony Orchestra conducted by David Hill have already produced some very fine recordings for Naxos. These have included choral music by Stanford (8573512), made a Recording of the Month by MusicWeb International: The Bach Choir, the soloists and the Bournemouth Symphony Orchestra under the baton of David Hill give an inspirational and often moving account of all three works. The dynamics of the recording are splendid. Herbert Howells Stabat Mater (8573176) gained a Gramophone award nomination: A very moving performance of Howellss reflections on Marys sorrow in a work that drew on the composers own painful grief upon the loss of his son, and their widely acclaimed recording of Deliuss Mass of Life (857286162) was a real revelation for Gramophone, and David Hill brings the score to life in a way that you seldom hear for MusicWeb International.