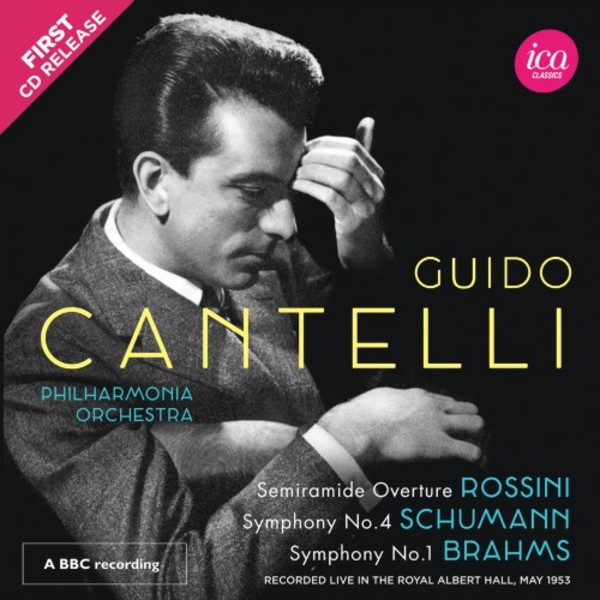 Guido Cantellis live recordings with the Philharmonia Orchestra are exceptionally rare because the BBC seldom broadcast any of his concerts. ICA Classics released Cantellis live concert from the Edinburgh Festival in September 1954 on ICAC5081 but there has been nothing else. Toscanini was Cantellis mentor and there is no doubt that he would have continued in the great conductors footsteps had he not been tragically killed in an air accident in Paris on the 24 November 1956. He was 36 years old.

The Royal Albert Hall recording made by Richard Itter in May 1953 is very well recorded for the period and preserves the palpable excitement of the whole concert. The Times wrote, Mr Cantellis interpretations are models of classical control... he coaxed dulcet tones from his players, notably from his first violins throughout Brahmss symphony and from his woodwind in the slow movement. The Daily Telegraph said: The Rossini was a beautifully judged performance.

All the works featured in the Royal Albert Hall concert were perennial favourites of Cantelli. He conducted Rossinis Semiramide Overture thirty-eight times and Brahmss Symphony No.1 on forty-six occasions during his brief international career.

The booklet notes are by Keith Bennett, author of Guido Cantelli: Just Eight Years of Fame.