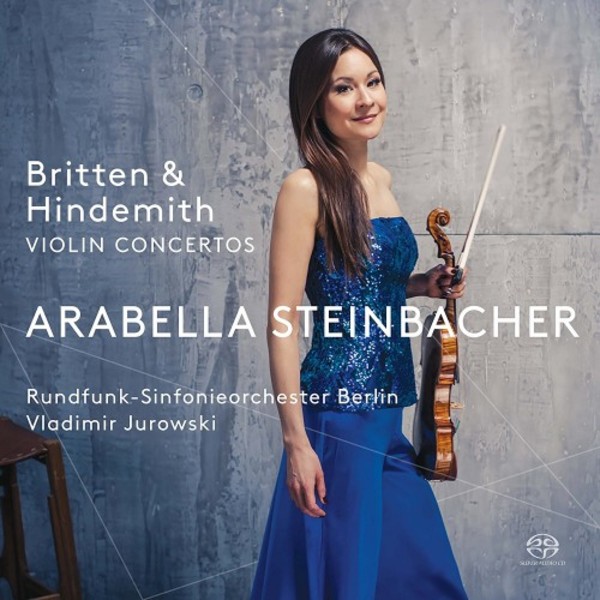 Breathtaking virtuosity flows seamlessly with expansive lyrical passages and fiendish passagework in this commanding performance by Arabella Steinbacher of the restless and technically demanding violin concertos of Britten and Hindemith, with the Rundfunk-Sinfonieorchester Berlin conducted by Vladimir Jurowski.

Brittens haunting and mesmerising Violin Concerto is considered one of the centurys finest. The three contrasting movements are replete with grand theatrical gestures, unabashed lyricism, and showstopping pyrotechnics, and the work closes with an austere passacaglia of other-wordly beauty and power. Following the works enthusiastic reception at its premiere in 1940 at Carnegie Hall, Britten declared So far, it is without question my best piece.

Steinbachers previous recordings for Pentatone have received widespread praise. For her playing in the Mendelssohn and Tchaikovsky violin concertos, Gramophone commented one could hardly wish for a more expressive account of both concertos; for the Korngold and Bruch Violin Concertos, Gramophone noted Steinbachers easy virtuosity with concern to find the right tone and nuance for every phrase. And BBC Music Magazine said of her last album, Fantasies, Rhapsodies, Daydreams, that it was recorded in glowing sound that feels astonishingly lifelike ... this recital is something of a triumph.

Steinbacher takes the technical difficulties of both works  Heifetz called the Britten unplayable  in her stride and finds a singing lyricism in both works. Her advocacy of the Hindemith is personal, too, as her father rehearsed the composers opera Die Harmonie der Welt. She has idiomatic partners in Jurowski and his new Berlin band, who make as much of Brittens and Hindemiths orchestral writing as Steinbacher does of her solo.  Hugh Canning (Album of the Week)
The Sunday Times 15 October 2017