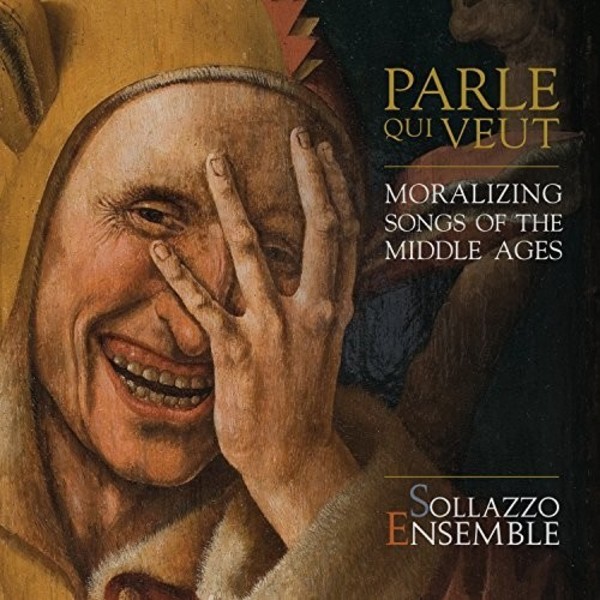 On Parle qui veut the performers embrace the exuberant style of flourishing melodies which was fashionable in the north of Italy in the fourteenth century. In contrast, a different kind of expressivity is required for the sober and succinct aesthetic of the works with French provenance. Sollazzo creates a pure, bright sound, enhanced by the songs incredibly open textures and the use of the rarely heard Pythagorean temperament.

All in all, this represents a remarkable debut.

Since forming in Basle in 2014 Sollazzo Ensemble has been supported by the eeemerging (Emerging European Ensembles) programme which has seen them perform across Europe; concerts in France, Germany, Switzerland, UK and Italy are planned for 2017. The ensemble is directed by fiddle player Anna Danilevskaia and brings together musicians with a strong interest in late medieval and early renaissance repertoires.

In 2014 Sollazzo won Vier Jahreszeiten, an internal chamber music competition of the Schola Cantorum in cooperation with the foundation August Pickhardt. The following year Sollazzo won the York Early Music International Young Artists Prize, as well as being rewarded by the public with the Friends of York Early Music Festival Prize, and in addition to that won the Cambridge Early Music Prize.

It is not just a question of technical brilliance but just as much that sense of engagement with the audience as well as each other.  The York Press

...they brought alive the music of the early 15th-century as never before...their palpable enjoyment was irresistible.  Gazette & Herald

This has to be one of the most exciting and engaging releases of medieval song in recent years. The Sollazzo Ensemble offer a programme of French and Italian works drawing chiefly on Trecento composers from around Florence and their French counterparts. The moralising theme allows for a great deal of variety from both known and anonymous composers to form a coherent and varied programme. ... The Sollazzo Ensemble are formed of three voices, two vielles and a harp. Their sound is generally bright, deft and energetic with a very clear focus on text. The singers use a variety of techniques to engage and communicate, from beautiful clear phrasing to crisp, expressive consonants, which at times allows them to tread a deliciously thin line between soft singing and electrifying stage whispers. Every performance on this disc is illuminating, considered and committed.  Edward Breen
Gramophone December 2017

a landmark debut
The Observer 22 October 2017

This is the first recording from the prize-winning Sollazzo Ensemble and in this ingeniously assembled collection they delight us with songs of defiance and gentle rebuke directed against the gossips and naysayers of 14th and 15th century society. The result is a magical sound-carpet of music drawn from repertoires not given convincing attention since the efforts of the Medieval Ensemble of London, David Munrow, and Gothic Voices some decades ago.  Anthony Pryer (Choral & Song Choice)
BBC Music Magazine February 2018

Go from my Window