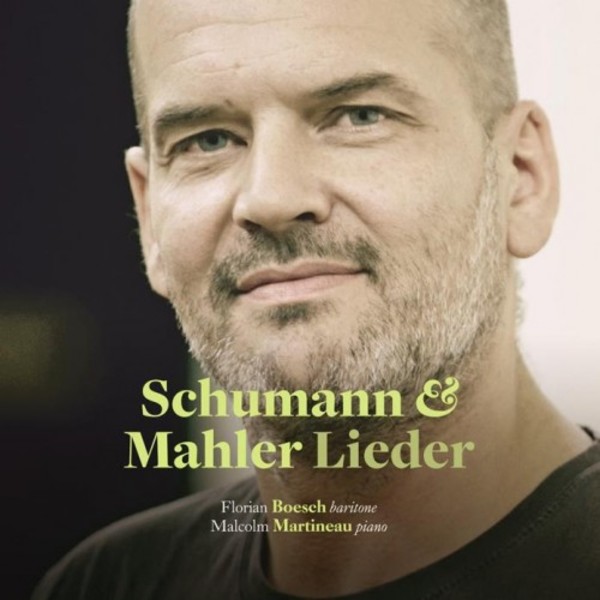 This recording brings together Florian Boesch, one of todays foremost Lieder interpreters, and Malcolm Martineau, who is widely recognised as one of the leading accompanists of his generation. With a partnership honed over many concerts and several recordings together, including a Grammy-nominated Die schöne Müllerin, the pair turn their attention to two of the greatest song cycles of the nineteenth century.

The recording opens with Schumanns Op.39, Liederkreis, settings of Joseph von Eichedorffs poems, and finishes with Mahlers Lieder eines fahrenden Gesellen, written around forty years later. The songs selected all tell, in varying hues, of the Romantic individuals sense of alienation from others and of transcendence, or the longing for it.

An expressive and accomplished storyteller, Boeschs perceptive phrasing and exquisite range of colours is well matched by Martineaus virtuosic and perfectly synchronized accompaniment.

Florian Boesch is an award-winning Austrian baritone whose recordings of Lieder have been widely acclaimed. His Carl Loewe recording received the prestigious Edison Klassiek Award whilst his recording of Schuberts Die schöne Müllerin was nominated for a 2015 Grammy Award. In 2017/18 Boesch will give recitals at the Philharmonie Luxemburg, Wigmore Hall London, Konzerthaus Dortmund, Musikverein Vienna and Concertgebouw Amsterdam. Previous recitals include the complete Schubert cycle in Glasgow and Australia (Sydney, Adelaide, Melbourne) with Malcolm Martineau.

Malcolm Martineau is recognised as one of the leading accompanists of his generation, working with many of the worlds greatest singers including Thomas Allen, Angela Gheorghiu, Susan Graham, Thomas Hampson, Anna Netrebko, Anne Sofie von Otter and Bryn Terfel.

In tandem with the ever-perceptive Malcolm Martineau, Boeschs concentrated Innigkeit can be haunting.  Gramophone

Boeschs talent is to deliver these songs as if he is simply in conversation, allowing the verse to fall naturally and directly.  The Times