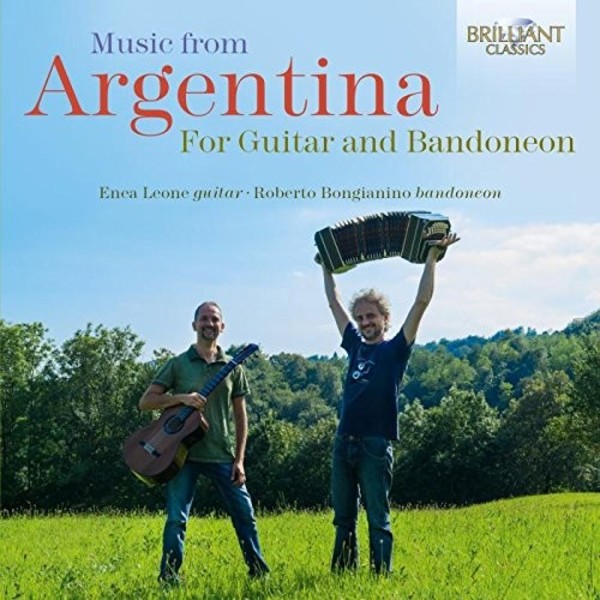 Music from Argentina for Guitar and Bandoneon

Not just Piazzolla: there are 13 composers represented here, many of them hardly known outside their native Argentina, giving this newly recorded set a unique place in the record catalogue. Anyone seduced by the smoky harmonies and the sensual rhythms of the tango will discover hidden treasure.
Between 1860 and 1925, the immigrants who had settled in Argentina to seek their fortune contributed to the development of this music, giving life to forms of varied derivation such as the Cuban habanera, the milonga (a type of folk dance), the African candombe and Italian songs. More of these immigrants came originally from Italy than from any other country, and the first musicians were Italian, which explains the lyrical element in the tango: its aura of melancholy and yearning.
Enea Leone and Roberto Bongianino retrace the various stages in the evolution of the tango on this album: the milonga (Milonga de mis amores, Corralera, La trampera), the tango itself (El Choclo, El Pollo Ricardo, Mi refugio, Silbando), and the vals (Pedacito de cielo, Flor de lino). Piazzolla is naturally well‐represented by classics such as Histoire du Tango (originally written for guitar and flute), and others in new arrangements. There are also several solo pieces, as well as an Italian homage to the world of the Tango: two compositions that feature in well‐loved Italian films, Il postino and the TV serial Il commissario Montalbano. Bongianino has transcribed several works from film scores, and made new arrangements for himself and Leone.
Like Piazzolla, the name of Carlos Gardel spread far and wide, not least thanks to the use of his music in soundtracks. Others such as Juan Carlos Cobain, Pedro Laurenz and Aníbal Troilo are waiting to be discovered by a worldwide audience.