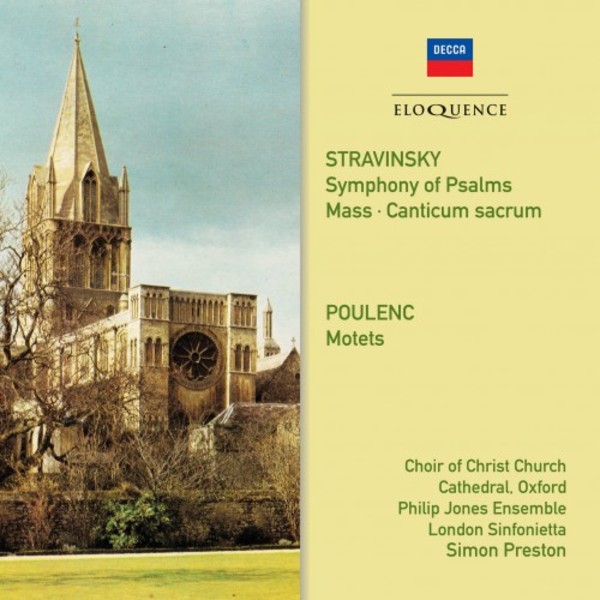 The Argo LP of the Symphony of Psalms and Canticum Sacrum caused a stir when it was first issued in 1975. All previous recordings had used female voices for the upper parts, but Stravinsky specifically asks for childrens voices in the Symphony, and his old-fashioned score markings in the Canticum Sacrum suggest that he had the same, penetrating timbre in mind.

Separated by a quarter of a century, the works themselves could otherwise hardly sound more different from each other: the Symphony a neoclassical piece scored for a relatively conventional orchestra (though deployed in often astonishingly unconventional, hieratic ways); Canticum Sacrum written in Stravinskys personal adoption of twelve-tone technique for two soloists, a choir and a wind-heavy ensemble omitting violins and cellos but including an organ in tribute to the city of Venice, and more specifically to the Basilica of San Marco.

This Christ Church recording of the Mass had appeared less controversially in 1973 on another Argo LP, coupled with the four Penitential Motets of Poulenc. Preston had become Organist and Choirmaster at Christ Church just three years earlier, at the remarkably young age of 32, yet the results already paid testament to his gifts as a choir trainer. The punchy attack of the trebles in the Mass is quite alien to the English cathedral tradition to which the choir belonged but entirely appropriate for Stravinsky: there is a fierce and fearless intensity to their singing that carries over into the Poulenc motets. This particular coupling was first issued in 1991 but has long been unavailable.

This record is quite an ear-opener ... Lucky Christ Church to have a choir, and a choirmaster, like this. - Gramophone, October 1975 (Symphony, Canticum sacrum)

The unearthly, white tone of the boys is entirely appropriate, the pacing vibrant [Symphony] ... This performance [Canticum Sacrum] fully achieves its Byzantine combination of richness and austerity. - Musical Times, August 1976

Stravinsky - Once, at a Border: Music from Tony Palmers Film