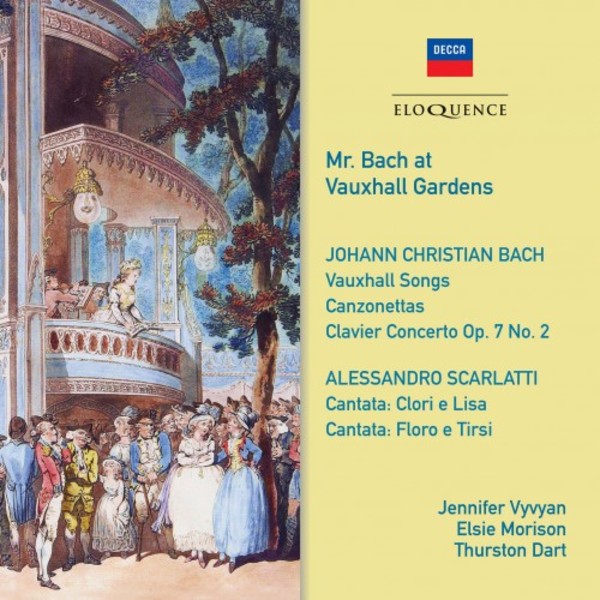 A pair of LOiseau-Lyre albums reissued together, including several items making their first appearance on Decca CD.

The soprano Jennifer Vyvyan was taught at the Royal Academy of Music in London by Roy Henderson, coach of Kathleen Ferrier. With Hendersons help she formed a secure technique, and quickly won acclaim for both operatic and oratorio roles in a wide variety of repertoire. Best known now as a singer favoured by Benjamin Britten, Vyvyan was also a leading figure in the revival of Baroque repertory: a celebrated interpreter of Purcell, Rameau, Bach and Handel who starred in landmark 1950s/60s reappraisals of the Handel operas at Sadlers Wells, Covent Garden and elsewhere. Both the fluency and the brilliance of her voice are on display in songs by Johann Christian Bach and cantatas by Alessandro Scarlatti.

J.C. Bach was writing for the open-air concerts at Vauxhall Gardens in London from which the original album and this reissue take their title. The Vauxhall songs are mellifluous, imbued with easy charm and written for accompaniment on keyboard: a part taken on this 1956 album by Thurston Dart, who as a scholar, conductor and virtuosic instrumentalist played a still more significant role in the early music revival in postwar Britain.

Dart is the soloist in J.C. Bachs F major Keyboard Concerto, op.7 no.2. The Italianate allure of the concerto is shared by six canzonettas in which he accompanies Vyvyan and Elsie Morison. In turn the canzonettas make a stylistic link back to a pair of pastoral cantatas by Scarlatti recorded the following year, full of disporting nymphs and lovelorn shepherds. Beautifully matched [] in intelligence as well as vocal colour was Gramophones verdict (December 1957) on the pairing of Vyvyan and Morison in these miniature unstaged operas. To which one could add an impassioned intensity  not least in their penultimate duet Ah fato beato!  and dramatic flair that confirm both sopranos as true stage animals.

This CD is one of five recordings released by Eloquence in September 2017 celebrating the art of Jennifer Vyvyan. All are Decca recordings from the 1950s, many appearing for the first time on Decca CDs, they include Songs of England (ELQ4825045), the first recording of Purcells The Fairy Queen (ELQ4827449), arias by Mozart and Haydn (ELQ4825049) and two litany settings by Mozart (ELQ4825041).

These duets are not only lovely songs, but they are most beautifully sung by Jennifer Vyvyan and Elsie Morison. The Vauxhall songs are also lovely and also well sung ... This is indeed a record of outstanding quality in every way, and I strongly recommend it.  Gramophone, November 1956 (J.C. Bach)