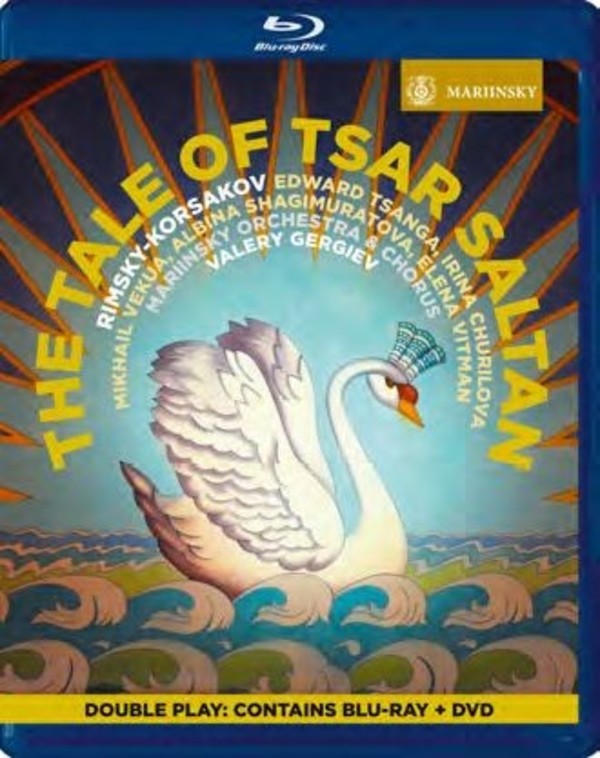 The Tale of Tsar Saltan

The Tale of Tsar Saltan

As a companion to The Golden Cockerel, Valery Gergiev presents a second Rimsky-Korsakov opera on the Mariinsky Label, The Tale of Tsar Saltan. Rarely staged and the only complete performance available on Blu-ray or DVD, this release is part of Valery Gergievs mission to showcase the breadth and depth that Russian music has to offer, capturing Rimsky-Korsakovs adventurous and magical work for posterity. This production features a cast of the Mariinskys finest singers, including sopranos Irina Churilova, as Tsaritsa Militrisa, and Albina Shagimuratova as The Swan-Princess; and bass-baritone Edward Tsanga, who died suddenly in early 2017, in the lead role.

Originally composed to celebrate Pushkins centenary, the full title of the work - The Tale of Tsar Saltan, of His Son the Renowned and Mighty Bogatyr Prince Gvidon Saltanovich, and of the Beautiful Princess-Swan - is indicative of the fantastical content of the opera. It is an old-fashioned Russian treat for the eyes and the ears from the countrys most long-standing musical institution. Filled with colourful music, typical of Rimsky-Korsakovs style, it is also the source of the instantly-recognisable 'Flight of the Bumblebee', which arrives when the magic Swan-Princess changes Prince Gvidon Saltanovich into an insect.

"This tale, of Tsar Saltan and the others, is truly fantastic" - Classical Source

Its as traditional a staging as is possible to imagine, Vladimir Firers designs based on Ivan Bilibins 1937 production, itself based on Bilibins 1905 picture book, which was a Russian classic of its time. Costumes are as bright as poster paint, while the set mostly comprises painted flats and cut-out props, giving the whole thing a two-dimensional storybook feel. ... Valery Gergiev has done more than any conductor to promote Rimskys operas and he applies his magic touch to Saltans glittering score, his Mariinsky band on top form. He has a fine cast, led by the late Edward Tsanga, a promising bass-baritone who died tragically young last January, aged just 37. His Saltan is firm-voiced and authoritative.  Mark Pullinger (DVD of the Month)
Gramophone February 2018