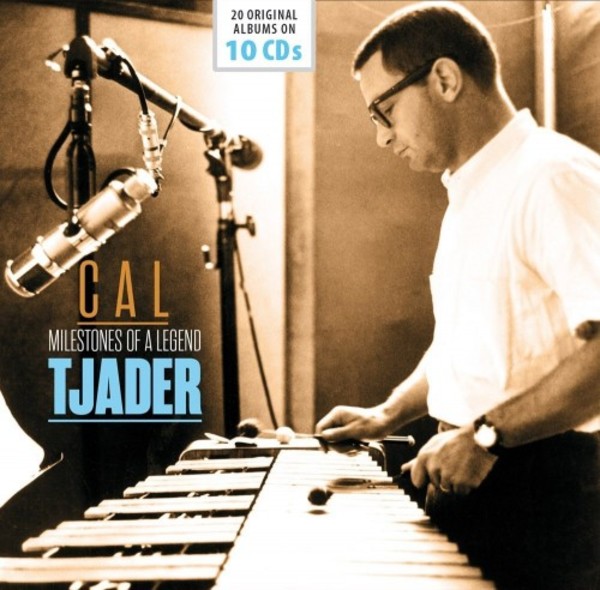 Original albums by one of the pioneers of Latin Jazz and one of the most important musicians of the West Coast Jazz scene in California. Featuring Stan Getz, Anita ODay, Dave Brubeck, Mongo Santamaria, Willie Bobo, Paul Horn and many more.

Cal Tjader was one of the pioneers of Latin Jazz and his principal instrument, the vibraphone, and one of the most important musicians of the West Coast Jazz scene in California. He was born in 1925 to a couple of Swedish dancers in St. Louis, Missouri, when the Vaudeville troupe to which his parents belonged made a stop-over there. The family settled down in San Mateo, California, two years later and Tjader received classical piano and tap dance lessons from his parents. Early live- and movie-appearances brought him the reputation of a tap dancing boy wonder.

As a sixteen-year-old, he won a Gene Krupa talent contest as a drummer. After his military service as a paramedic he wanted to become a teacher via the G.I. bill, but he met Dave Brubeck and Paul Desmond at San Francisco State College in the late Forties and soon became the drummer in Brubecks Octet. In Brubecks trio he switched to drums and vibraphone, being self-taught on the latter. After Brubeck had an accident, Tjader founded his own trio. As the vibraphonist of the popular George Shearing Quintets, he won the Downbeat Critics Poll for the first time in 1953. Tjader and bassist Al McKibbon convinced Shearing to include Cuban percussionists in the band, while Tjader also played bongos. With McKibbon he listened to the most important musicians of the Latin jazz scene: Machito, Chico OFarrill and the great percussionists Mongo Santamaria and Willie Bobo, both members of Tito Puentes orchestra. He left Shearing not much later and laid the foundation for his world career with the popular Cal Tjader Modern Mambo Quintet. Over the next ten years he recorded 30 albums for Fantasy Records, of which many highlights have been gathered here. He switched to Verve in the 60s, where he landed his biggest hit with Soul Sauce. Sadly, he suffered a fatal heart attack on tour in 1982. His music is timeless and was discovered by a young audience through the Acid Jazz DJs at the end of the 80s and was used in a new context by countless samples in important hip-hop productions.