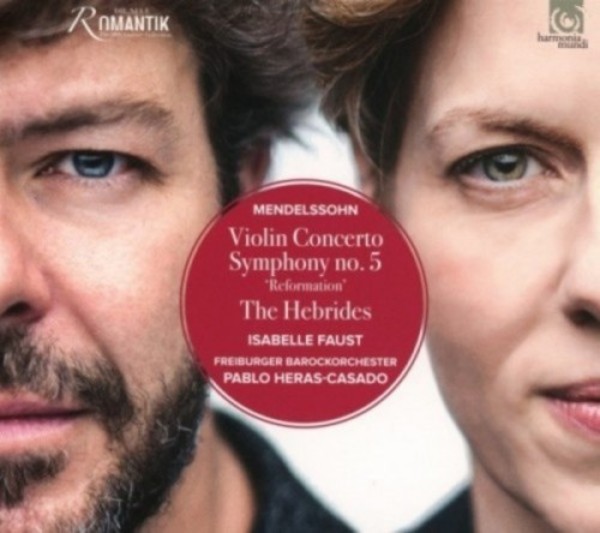 After the mystical Hebrides Overture and the masterly Reformation Symphony, Mendelssohn embarked on his second Violin Concerto. After a long gestation in which he polished the orchestration and meticulously revised the solo part, the work was finally premiered in Leipzig in 1845. From David to Joachim, virtuosos honed the violin part with the composer over successive revivals, leaving to posterity traces of their playing style: fingering, bowing and score markings. This precious heritage has been scrutinised by Isabelle, as she did for her Brahms Violin Concerto recording, as a previously unexploited expressive resource. Isabelle Faust, accompanied by the Freiburger Barockorchester, in top form, under the direction of Pablo Heras-Casado, offers us a miracle of purity and lyricism in a freshly-minted interpretation that fulfils Mendelssohns promise of a concerto to make the angels rejoice in heaven!

Do we really need yet another recording of Mendelssohns Violin Concerto? Within an exceptionally crowded catalogue, and with so many high-quality performances, any newcomer has to be very special to make its mark. Happily, this new disc from Isabelle Faust  newly announced winner of Gramophones Concerto Award for her accounts of Mozarts violin concertos  is up there with the very greatest, and at the same time is utterly distinctive. Partnered by the period instruments of the Freiburger Barockorchester under the alert direction of Pablo Heras-Casado, its a lean-textured, joyous performance, positively bursting with life.

Playing on the Sleeping Beauty Stradivarius of 1704, Faust is sparing with vibrato, instead using portamento (subtle sliding between notes) to remarkably good effect as an expressive device. The Concertos famous opening has rarely sounded so magical; at a brisk tempo, textures are transparent, and Faust displays exceptional agility in the fast passagework. Orchestral strings are nimble, but its the wind playing that really stands out, not least in the celebrated second subject (over the soloists sustained open G); at the recapitulation, the addition of tart oboes to the flutes and clarinets really tells. Before that, the transition from the cadenza to the beginning of the recapitulation  a groundbreaking formal layout  shows all Fausts mastery of nuance in her careful gradation of saltando (the bouncing cross-string arpeggio). The central Andante is utterly magical, trumpets and drums making their impact felt in the troubled middle section with great sensitivity, before the soloists radiant cry to the heavens (or so it seems in this performance).

As for the finale, it zips along with fantastic litheness, a miracle of Mendelssohns later years, with all the freshness and enchantment of his Midsummer Nights Dream music. Heras-Casado and the Freiburgers shadow Faust with extraordinary attention; its as if orchestra and soloist were living and breathing completely as one. Indeed, the performance as a whole had us falling in love with the work as if for the first time, so fresh and uplifting is it.

For the rest of the disc, the orchestra takes centre stage, and the performances are every bit as classy. Heras-Casados reading of the popular Hebrides Overture is another case of period instruments breathing new life into familiar music, and again the wind playing  including marvellously fruity horns  is outstanding. But here its the string playing  some of it surprisingly tricky  that adds real atmosphere, particularly in those eerily sustained pages between the tempestuous eruptions. Conjuring up an Ossianic dream of exceptional vividness, this performance is much more than just an orchestral seascape, and a notable addition to the discography.

The disc is rounded off with a splendidly persuasive account of the Reformation Symphony, composed for the tercentenary of the Confessio Augustana, when Philipp Melanchton presented Emperor Charles V with the fundamental creed of the Lutheran Church. It had an unfortunate early performance history, and remained unpublished until after Mendelssohns death, when it appeared with the misleadingly high opus number of 107, and a just as misleading numbering as the Fifth of Mendelssohns five full orchestral symphonies. Hinting at a struggle between faiths, the work opens with a slow introduction including the Catholic Dresden Amen (familiar today from Wagners Parsifal) before a main Allegro con fuoco of exceptional storminess. The second movement is a delightfully graceful Allegro vivace which dances along with real style in this performance, followed by an introspective Andante of exceptional tenderness. The finale is an ambitious fantasy on the Lutheran chorale Ein feste Burg which Heras-Casado and his players carry off with total conviction.

Whether for Fausts outstanding account of the Violin Concerto, or for Heras-Casados latest addition to his thought-provoking survey of the Mendelssohn symphonies, this disc is an absolute must for all lovers of Mendelssohn. It lifts the spirits like very few others.