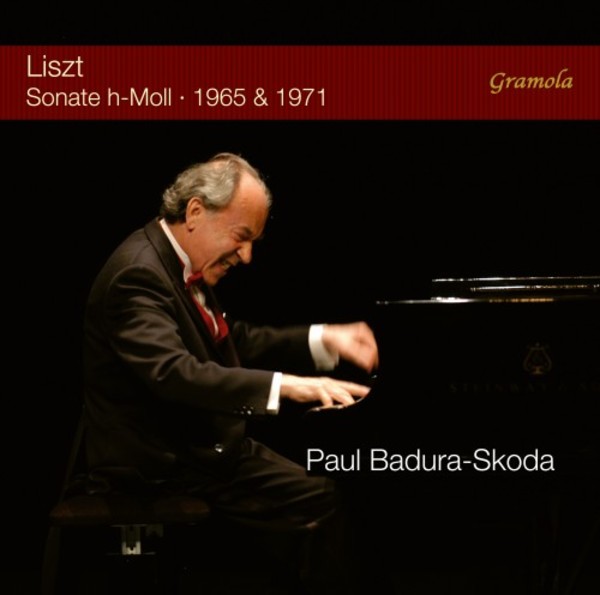 Paul Badura-Skoda describes his performance of the B minor Sonata by Franz Liszt from 29 March 1965 in the Carnegie Hall in New York as one of the most inspired achievements of my career as a pianist. To confront a perfidious and nasty critique two weeks before in the same venue, Badura-Skoda played as unleashed, with an enormous energy, fuelled in part by internal fury. This concert recording which is to an extent owed to that heat of the moment is being published now on CD, featuring a second interpretation of the same Sonata, a studio recording made in the Mozartsaal of the Vienna Konzerthaus six years later. This version is more controlled and, in the calmer passages, more internalised and contemplative than the New York interpretation. Let it be up to the listener to decide which of the two versions is the preferred one.

Three events were decisive for his beginnings: Furtwängler and Karajan hired the still unknown musician for their concerts in Vienna in 1949. By standing in for the sick Edwin Fischer at the Salzburg Festival (1950), he became an international star.

Major tours as a soloist followed: Australia in 1952, USACanada in 1952/53, Latin America from Mexico to Argentina in 1953, and in 1956 he conducted a chamber orchestra of the Vienna Symphony Orchestra on a tour of Italy.

Further highlights in his career were his first tour of Japan, where he appeared in Tokyo alone 14 times, and the first, highly successful tour through the Soviet Union in 1964, which was followed by many other tours. In 1979, Paul Badura-Skoda was the first Western pianist to perform in China after the Cultural Revolution. In the Mozart jubilee year 1991, he played the cycle of all Mozarts sonatas in Paris, Vienna, Munich, Madrid, Tokyo, Hong Kong etc. On the occasion of his 80th birthday, he could be heard in all the parts of the world.

The focus of his extensive repertoire (he has made more than 200 recordings) is on works by Mozart, Beethoven and Schubert. Paul Badura-Skoda holds honorary doctorates from the Academy of Music and Performing Art in Mannheim (2006), the Pontificia Universidad Catolica del Peru (2010) and the Akademii Muzycznej w Krakowie - Academy of Music in Cracow (2013).