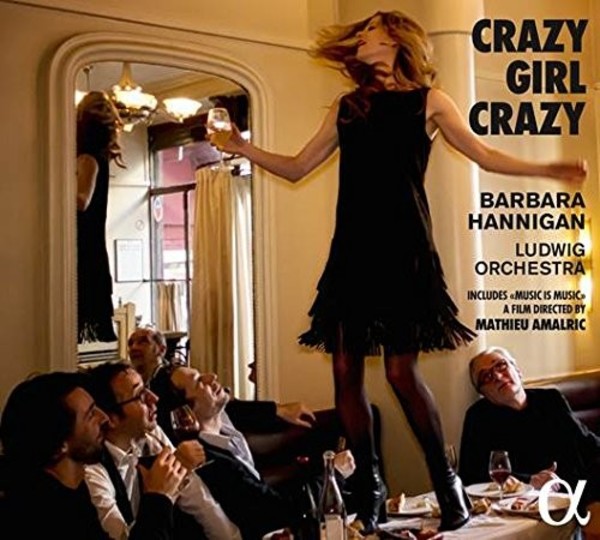 Whether singing, conducting, dancing or acting, the Canadian soprano Barbara Hannigan is a constant source of fascination. Alpha Classics is proud to enter her world and her very first album as singer and conductor in 2017: with the Amsterdam based orchestra Ensemble Ludwig, of which she is associate artist.

Barbara Hannigan has devised a programme including Bergs Lulu Suite and Gershwins Girl Crazy in a Suite newly arranged by the multi award-winning American composer Bill Elliott. To complement these two pieces, she has recorded Berios spectacular Sequenza III for solo voice.

An outstanding soprano, a distinguished interpreter of the music of the twentieth and twenty-first centuries, an all-round artist who creates a sensation on concert platforms and in opera houses throughout the world, Barbara Hannigan has enriched her palette over the past few years by devoting a portion of her activities to conducting. This album in the form of a musical portrait of the artist, is completed by a DVD of a film made by Mathieu Amalric during the rehearsals and recording sessions. It plunges into the heart of the orchestra with a very personal look at the exchanges between conductor and musicians.

Over the next few years, Alpha will accompany Barbara Hannigan in a number of projects from very varied horizons.

there can be no better advocate for any composer than Ms. Hannigan - New York Times, 2016

It was created for soprano Barbara Hannigan and is a stunning vehicle for her, with its floating, effortless-sounding high notes and pure, expressive tone - The Guardian, 2016 *****

On this stunning label debut on Alpha Classics, Canadian soprano Barbara Hannigan takes multi-tasking to new levels. Not only does she sing and conduct Bergs technically and emotionally demanding Lulu Suite, as well as performing Luciano Berios dazzlingly virtuosic Sequenza III for solo voice. She has also (together with Bill Elliott) arranged a marvellous new suite from George Gershwins Girl Crazy, brilliantly orchestrated by Elliott. Furthermore, she and the Ludwig Orchestra (a flexible Dutch ensemble collective) succeed triumphantly in presenting a coherent programme that binds these seemingly disparate works together. The linchpin is the figure of Lulu herself: created by German playwright Frank Wedekind (1864-1918), she represents for Hannigan a free spirit, the Earth Spirit or Erdegeist, and that free spirit runs through all three works in one way or another. As does the idea of craziness, Hannigan explains. Not madness, but the craziness of being in love, of being crazy about someone, of being driven crazy by an inner rhythm.

Berio originally composed Sequenza III (1965) for the legendary Cathy Berberian, but Hannigan steps out boldly from under that long-reaching shadow, transposing the work up (as allowed by Berios score) to tap into a girl-like image of the imagined 15-year-old Lulu. Hannigan negotiates the huge challenges of this avant garde score  with its vocal clicks, breathless vowels, enigmatically fractured text, and wide dynamic and pitch ranges  with seeming effortlessness (in fact, it must reflect many hours of hard work). She is by turns playful, coquettish, wistful and reflective, and the result is as absorbing and convincing as it is challenging.

And it makes for a brilliant curtain-raiser (in the manner of an imagined prequel) to the Lulu Suite itself. Here Hannigan  who has portrayed Lulu on stage to great acclaim  is completely at one with the Ludwig players, and a clearly happy working relationship is reflected in performance of remarkable emotional openness, lyricism and sensuousness. The forces may be relatively small (a string section founded on just three double basses and six cellos), but the intensity and focus more than equals that of many more established ensembles, with some outstanding wind solos. Hannigan brings out the seediness of the Ostinato second movement, and the Ländler-like jazziness of the fourth-movement Variations. The opening Rondo, for all its vastness, takes on a more than usually personal depth, while in the central Lied der Lulu Hannigans voice retains the youthfulness from the Berio opener, in a performance of enormous vocal clarity and beguilingly assured self-awareness. The concluding Adagio, ending with Countess Geschwitzs heartfelt final pledge to the murdered Lulu, is every bit as moving as it should be.

From Berio and Berg to Gershwin might seem an unlikely leap but, as Hannigan points out, Berg met and admired the American composer, and Gershwin even heard a special performance of Bergs Lyric Suite, as well as playing some of his own music on the same evening. Moreover, Gershwin put the finishing touches to Girl Crazy at the same time as Berg was composing Lulu. Hannigan and Elliott tap into these connections in a hugely enjoyable suite that references not only Lulu itself (using an identical scoring to Bergs Suite), but also manages to incorporate snatches of Ligeti, Weill, Vivier and Mahler (the finale of whose Third Symphony appears as a link between verses of But not for me!). Gershwins songs are reordered to tell another imagined Lulu story, moving forward and backward in decadent times through moments when love was all around and the world was dancing. For this Americanised Lulu-figure, Hannigan adopts a more glitzy tone of voice which is utterly convincing and just as expressively nuanced; she even manages to get the orchestra singing along in a richly-scored Broadway-style version of Embraceable you. And theres great fun to be had with rhythmic disruption in a version of Strike up the band. These are sophisticated, witty arrangements, rounded off with an exuberant, jazzy, big-band version of I got rhythm: its the cherry on the cake of a tremendously entertaining disc which explores real emotional depths as well as delighting the ear.

Add to all this a classy recording from the Alpha team, attractive presentation and a bonus 20-minute behind-the-scenes DVD, and this wonderfully crazy disc deserves every success.

The theme is craziness; 'the craziness of being in love... of being driven crazy by an internal rhythm.' But these are no barmy juxtapositions. As each piece unfolds in lyrical silver, shot with gaiety, abandon, black shadow, they become part of a 'hall of mirrors' in which Lulu - and Hannigan herself - is reflected, just out of reach. ... it takes a performer of Hannigan's calibre to show how gloriously illuminating supposedly lateral connections can be.  Steph Power (Recording of the Month)
BBC Music Magazine December 2017

Canadian soprano Barbara Hannigan opens this album with a reminder, in no shy terms, of what a stupidly seductive vocalist she is. She flits, warbles and giggles through Berios high-wire Sequenza III from 1965; she has a way of making everything just float.  Kate Molleson
Gramophone 14 September 2017