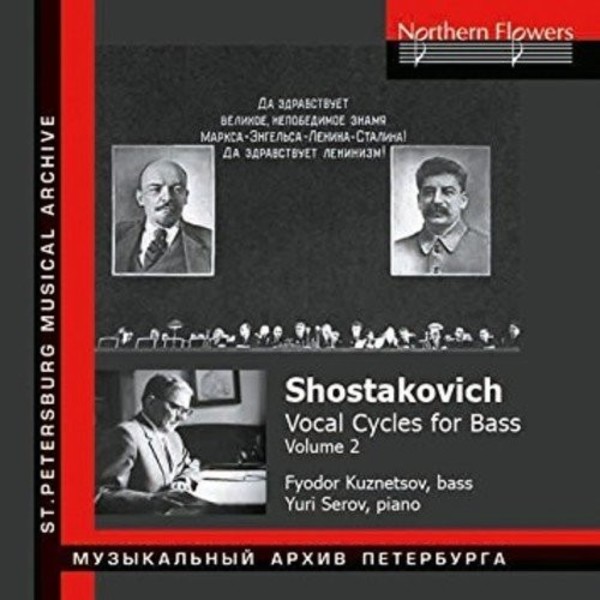 Antiformalist Rayok
Preface to the complete edition of my works and thoughts about this preface, op.123
Spring, Spring, op.128
Suite on Verses by Michelangelo, op.145 (bass and piano)

Antiformalist Rayok
Preface to the complete edition of my works and thoughts about this preface, op.123
Spring, Spring, op.128
Suite on Verses by Michelangelo, op.145 (bass and piano)

A Foreword to my Complete Works and a Brief Contemplation in Respect of this Foreword was composed by Shostakovich specially for his author's concert dedicated to his 60th anniversary. Slightly tampering with Pushkin's epigram The Story of a Versemonger to put it in the first person, the composer then enumerates his many titles generously awarded to him by the Soviet Power in the last years of his life. There is some surprising, almost painful irony sounding in each word, in each phrase of music, strikingly different from the satire and humour frequent and familiar with Shostakovich.

In its final edition the Anti-Formalistic Raree Show (Anti-Formalistic Rayok) may probably be defined as a single-act satiric opera or cantata. The genre of the opus is traceable, without doubt, to a similar opus of Modest Mussorgsky (Rayok), and from that piece, to the folk raree show, or the pic theatre. In the early Twenties in St. Petersburg young Shostakovich could still see and hear the last live raree showmen. On holidays they showed in the street their farces, where colourful, often caricature moving pictures (pics or rarees) were displayed with comical vocal comments.

Spring, Spring... to words by Pushkin is the only finished song of the conceived new Pushkinian string. The bright atmosphere, and even some radiance of the composition (especially when accompanied by piano) is largely consonant to the composer's disposition in the spring and summer of 1967: Moscow was awaiting the premiere of the Second Violin Concerto and the Blockian cycle, his illness had retreated for a while, and he was in a very good shape.

The Suite to Words by Michelangelo Buonarroti was written by the composer in 1974, one year before his death. On the wave of interest on the sculptor's heritage aroused by his 500th anniversary, Shostakovich addressed sonnets of Michelangelo, finding in his poetry motifs surprisingly consonant with himself. Moreover, in this opus the approach to selection of poems seems so utterly personal as nowhere else. It looks like nothing has changed in the world in the last five hundred years. Just as before, "heaven is indifferent to earthly merits", and as before, "the fierce populace don't need works of mine Art"; just as before, "'Tis sweet to sleep, e'en sweeter to be a stone, / When 'round me there is shame and crime alone. / There's some relief in it when you can't feel, nor see..."