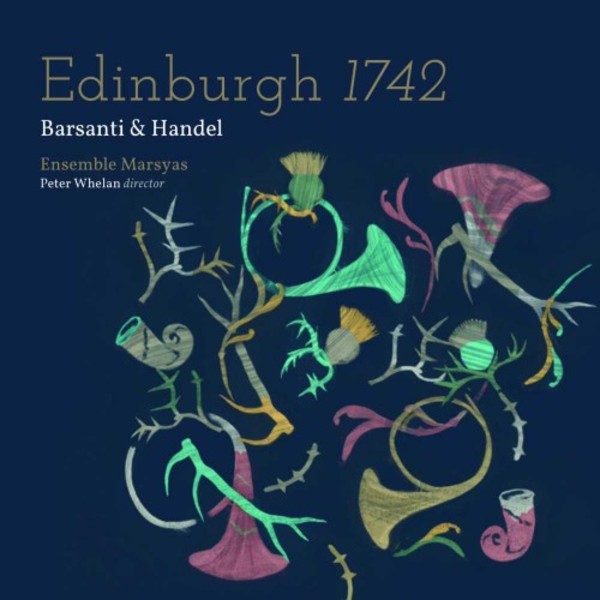 A Collection of Old Scots Tunes

A Collection of Old Scots Tunes

The popular Ensemble Marsyas returns with a diverse programme of concerti, wind music and Scottish songs by composers Francesco Barsanti and George Frideric Handel, centred around the music composed for The Edinburgh Musical Society.
Horn soloists Alec Frank-Gemmill and Joseph Walters take centre stage in Handels Concerto for French Horns, exemplifying the extraordinary vogue for horn music at this time. Timpanist Alan Emslie joins them for Barsantis Concerti grossi Op.3, an unusual concertino comprising timpani and natural horns.
Barsantis four Old Scots Tunes, notable as one of the first examples of Scottish Traditional music to be faithfully transcribed, introduces fiddle player Colin Scobie. Completing the programme is Handels aria Sta nellIrcana from Alcina, featuring mezzo-soprano Emilie Renard, and the March for Wind Band, HWV 346.
The Edinburgh based chamber group comprises the best of a new generation of musicians specialising in early music across Europe. Ensemble Marsyas previous recordings of Zelenka, Fasch and Handel each received several five star reviews. Peter Whelan is the founder and Artistic Director of Ensemble Marsyas and is in constant demand as both a performer and director.
The Ensemble Marsyas impresses me with their nimble fingers...but it's the group's nuance that's transfixing. - BBC Music Magazine

This splendid disc from the Edinburgh-based Ensemble Marsyas under their director Peter Whelan focuses on the music that might have been heard at the Edinburgh Musical Society in the early 1740s. The Society, formed in 1728, had among its members the cream of Edinburgh society, and liked to keep up to date with the latest musical vogues. One of these was the almost ubiquitous use of French horns, which had moved up from their traditional associations with the hunt to be a necessary accoutrement for any society noble or gentleman. A pair of servants playing horns would announce arrivals and perform at banquets and other events, including open-air activities. And, naturally enough, they were frequently heard at musical gatherings such as those organised by the society.

Think of foreign musicians active in Britain in the late Baroque period and you think immediately of Handel and, perhaps, Francesco Geminiani. But the name of Francesco Barsanti is unlikely to come to mind: this disc will certainly change that perception! Born in Lucca in 1690 and briefly active in Bologna, Barsanti emigrated to London around 1723; an unassuming but hugely talented musician, he gradually built up a wide base of patrons, playing, copying and composing for them. After a short time in York in the early 1730s, in 1735 he was invited by the EMS to Edinburgh, where he remained until returning to London in 1743, even acquiring a Scottish wife. His seven surviving publications are marvellously varied, and two of them provide the main fare for this recording: ten Concerti grossi, op.3, and a volume of 28 old Scots tunes for treble instrument and bass.

Of the ten Concerti grossi, five are scored for trumpet, oboe, and strings, but it is the first five, for two horns, timpani and strings, that feature here, and what wonderful works they are! The combination of horns and timpani is an unusual one, but hugely effective (J.S. Bach used it occasionally), and often tremendously exciting. Try the second movement Allegro of Opus 3 no.3 (track 2) to hear just how thrilling it can be. But theres also a demanding horn solo in the Adagio of concerto no.5,  (track 25), executed with great sensitivity and secureness by Alec Frank Gemmill, who is one of the stars of this disc. Strings and continuo are marvellous too, with some spirited strumming of the Baroque guitar by star lutenist Elizabeth Kenny.

Four of the tunes contained in the Collection of Old Scots Tunes with bass for violoncello or harpsichord are heard here, all slow, two in the minor mode and two in the major. A striking feature of Barsantis arrangements is how faithful they are to the originals: he seems to have had a real feel and respect for Scottish culture, and when played on the violin, as they are here by Colin Scobie, the ornamentation sounds remarkably close to the portamento and cantillation used by traditional Scots folk singers. With tasteful bass lines and a true feel for the folk melos, these are real treasures, and we must hope to hear more of the collection from Ensemble Marsyas in the future.

In the early 1740s Handels fame was at its zenith, and the Edinburgh Music Societys activities included plenty of his works. those on this disc all feature a pair of horns: the Concerto for French horns in F, HWV 331, is none other than the opening two movements of the second Water Music suite, transposed from the original D major, and including the famous hornpipe. Theres an unassuming but entertaining March extracted from the overture to Tolomeo, and Ruggieros hunt-themed Act 3 aria from Alcina, brilliantly sung by mezzo-soprano Emilie Renard: its just a shame that we dont hear more from her  clearly a name to watch.

As well as providing a fascinating insight into musical Edinburgh of the 1730s and 40s, this disc is a much-needed boost for Barsantis posthumous reputation. By all accounts he was a modest and retiring personality, in stark contrast with the energetically self-promoting Handel, yet his music easily withstands comparison with that of his older contemporary. Engaging, entertaining, sensitive and remarkably assured, it will appeal to all lovers of Baroque music. Altogether a triumphant disc from Linn records and the Ensemble Marsyas.

If you like baroque music that celebrates the sound of horns then this CD is for you. [...] The performances by Ensemble Marsyas, shortly to give concerts in Dublin and Kilkenny, are consistently bracing, and likely to do no amount of good for Barsantis 21st-century reputation.  Michael Dervan
The Irish Times 2 August 2017

[Barsantis] six published opus numbers include a set of 10 concerti grossi, Op 3, five of them for trumpet, oboes and strings and five for two horns, timpani and strings; and in the expert hands of Ensemble Marsyas and their horn players Alec Frank-Gemmill and Joseph Walters, the latter turn out to be works of enormous joy and spirit. ... Barsanti the Scotsman is also heard in four Scots Tunes sweetly and idiomatically played by violinist Colin Scobie. ... Once again Baroque music surprises and delights!  Lindsay Kemp
Gramophone Awards 2017

Peter Whelan and his terrific Ensemble Marsyas reconstruct a typical [Edinburgh Musical Society] concert and its a rich insight, played with great style and charisma. We get the broad, bright elegance of Barsantis Concerti Grossi, his tasteful treatment of old Scots tunes, plus a double horn concerto and an aria from Alcina by Handel, mezzo Emilie Renard fierce as Tenducci.  Kate Molleson
The Guardian 3 August 2017