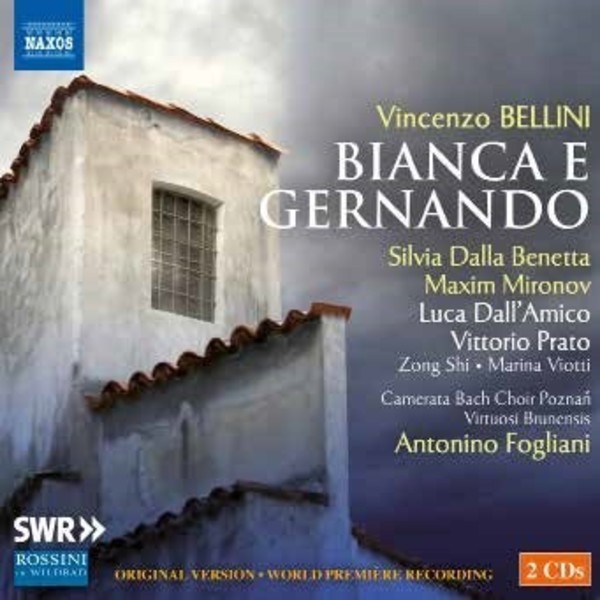 Vincenzo Bellini was among the most important Italian opera composers of the early 19th century, and the quintessential representative of its bel canto tradition. Despite his enduring renown, his official operatic debut Bianca e Gernando was known only in its revised version of Bianca e Fernando until this rediscovery and revival at Bad Wildbad in July 2016. Set in the ducal palace of Agrigento and with its tale of secretive plots and triumph over tyranny, this original version of the opera presents both unknown music and significant differences from the revised version, giving its dramatic shape a distinctive new character.

Bellinis Bianca e Fernando has always been something of a rarity both on stage and in recordings, overshadowed by triumphant operas such as Norma and I Puritani. There have been some recordings, but even the 2008 Teatro Massima Bellini di Catania recording on the Nuova Era label is now out of print. Whatever the competition, this revival and première recording of the original version, Bianca e Gernando, painstakingly researched and restored from a copyists manuscript, stands on its own as a uniquely valuable milestone in this legendary composers legacy.

This production was part of Bad Wildbads 2016 summer season, attracting attention as a remarkable revival from a composer about whom it was thought everything was already known. The role of Bianca is taken by Silvia Dalla Benetta, a soprano renowned for starring roles in operas by Verdi, Rossini and others, recorded on DVDs for labels including Dynamic and C Major. Dalla Benetta exhibits her easy mastery of Rossinian coloratura and brings her fine acting skills to bear (Fanfare) in Rossinis LInganno felice at Wildbad in 2015, which also included the fine Virtuosi Brunensis (Opera News).

Tenor Maxim Mironov has an established reputation with operas by Rossini, also appearing in recordings such as that of Mercadentes I Briganti (8660343-44), one of many in the Naxos catalogue conducted by Italian opera specialist Antonino Fogliani. This 2012 Wildbad theatre revival has the Russian tenor Maxim Mironov in the Rubini role, and very fine he is too. (Gramophone)

Antonino Fogliani was born in Messina and graduated as a pianist before studying conducting at the Giuseppe Verdi Conservatory in Milan. He went on to work with Franco Donatoni and Enrico Moricone at the Accademia Chigiana and was an assistant to Gianluigi Gelmetti. His début at the Pesaro Rossini Opera Festival in 2001 was followed by engagements in major opera houses including La Fenice, Teatro dellOpera, Teatro di San Carlo, the Opéra Comique and La Scala. International engagements have taken him to Monte Carlo, Moscow, Houston, and Barcelona, among others. In 2011 he was appointed music director at Rossini in Wildbad.