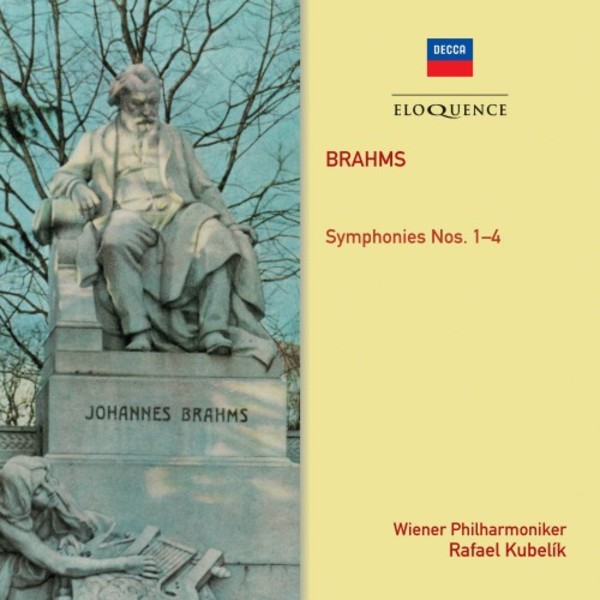 Even while creating a sensation across the US, with concerts in Chicago, Cleveland, New York and further afield, Rafael Kubelík recorded the four symphonies of Brahms with the Vienna Philharmonic for Decca (in stereo) in the 1950s. Long unavailable, they are here presented together for the first time on CD, in an economical 2-CD package, further enhanced by both new digital remasterings from the original tapes, and an extensive appreciation of the happy marriage of composer and conductor by Rob Cowan.

Cowan observes that Kubelík came to take a more expansive view of this music in the recorded cycle he made almost 30 years later with the Bavarian Radio Symphony Orchestra. In Vienna, exposition repeats were cut, tempi were taut and often uncommonly swift for the time, even in the pastoral Second and ruminative Third symphonies; impulsiveness and sudden access to drama were paramount, yet always modulated by the renowned, sweetly refined string sound. Music has always developed by moving on to something new once one idiom has been exhausted, the conductor once remarked, but it has always had a form. Like a tree, like a man, it must have a skeleton, flesh and veins  it must have its own logic.

Such sensitivity to nature and to his fellow man stood Kubelík in good stead when approaching the work of a composer who felt likewise, and yet whose creativity was indeed ruthlessly disciplined by musical logic, whether in the long-gestated, darkness-to-light journey of the First or the ineluctable tragedy of the Fourth. These qualities, too, Kubelík had absorbed from his father, the violinist Jan Kubelík, whom he always regarded with more than filial respect. There is, indeed, an evolving tradition at work in these performances which commands attention anew.

The performance illuminated by the fine general quality of sound is a strong one  The symphony is kept moving throughout, culminating in a finale which is positively exhilarating. - Gramophone, June 1958 (Symphony no.1)

The slow movement is taken unusually slowly but Kubelík justified it in drawing hushed expressive playing from the Vienna orchestra. - The Stereo Record Guide, 1958 (Symphony no.1)

Kubelíks performance has a splendid impulse to it; and the Vienna Philharmonic is at its best  this is an exciting version. - Gramophone, February 1959 (Symphony no.2)

The strong point [] is the breadth of dynamic range, and this tells particularly in the finale. - The Stereo Record Guide, 1958 (Symphony no.3)

Kubelík gives a smooth and loving reading of the work, reserving excitement, as such, for the finale. The excitement, in fact, is doubly effective when held in reserve. - Gramophone, October 1956 (Symphony no.4)