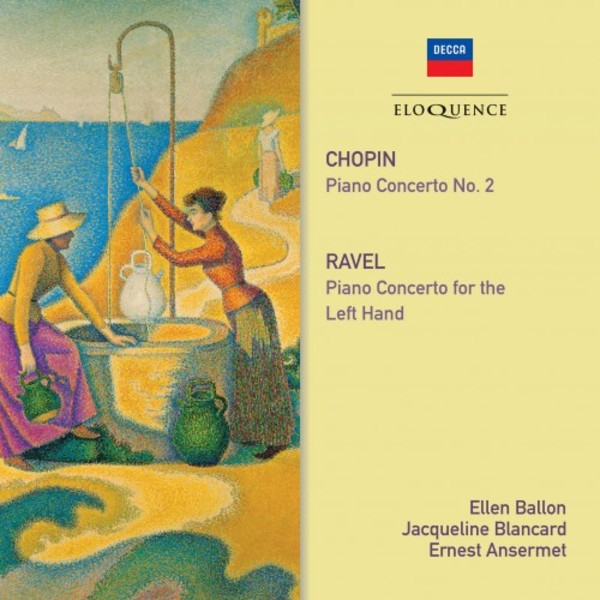 Piano Concerto in D major for the left hand

Piano Concerto in D major for the left hand

The Eloquence label has restored to modern circulation many recordings of the Swiss conductor Ernest Ansermet, but few of them have been as overlooked as this pair of concertos, which are now released internationally for the first time on CD, in new digital remasterings.

French music found Ansermet in his element, and he was a concerto accompanist of renowned sensitivity: the slow movement is particularly sweetly felt, as Gramophone remarked in its March 1951 review of the Chopin F minor Concerto. In his booklet note, François Hundry (author of the authoritative biography of Ansermet) remarks on the frisson and Romantic sensibility which pianist and conductor create together in this, their only partnership on record.

The Canadian-born pianist Ellen Ballon (18981969) was especially renowned for her performances of Chopin and Villa-Lobos. Arthur Rubinstein, no less, once hailed her as the greatest pianistic genius I have ever met. After a prodigious start to her career, she studied with Rafael Joseffy and Josef Hofmann in New York and then Wilhelm Backhaus in Vienna. Over the course of half a century, she played at the White House for three different US presidents.

Like Ballon, Jacqueline Blancard (19091994) made several solo recordings for Decca, of Mozart, Schumann and Brahms. She is hardly better known now, though she gave the Swiss premiere of Ravels Concerto for the Left Hand with Ansermet in 1937, made its first recording the following year (for Polydor under Charles Munch) and then recorded both Ravel concertos for Decca (reissued on ELQ4800070) with Ansermet, who evidently held his fellow Swiss musician in high esteem. Issued here is not that 1953 recording but yet a third, made in 1949.

The Ravel concertos are well served on discs by such eminent French pianists as Robert Casadesus, Monique Haas and Marguerite Long. Jacqueline Blancard belongs in this august company as a performer, and since she has the collaboration of the best Ravel conductor now functioning, this recording is strongly recommended. - High Fidelity, January 1954 (Ravel)