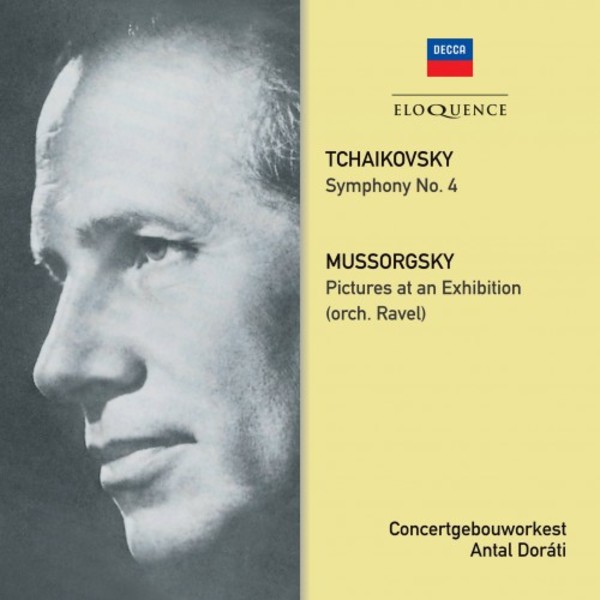 Tchaikovsky - Symphony no.4; Mussorgsky - Pictures at an Exhibition

The Hungarian conductor Antal Doráti had already made several recordings in the US with various orchestras for the Mercury label when Philips engaged him to begin working in the studio with the Royal Concertgebouw Orchestra of Amsterdam.

There had been thrilling accounts of Tchaikovsky from both Minneapolis and Chicago and so it was to be expected that Dorátis Dutch recordings would begin by concentrating on Slavic repertoire  indeed just as Philips itself had done: the label was launched in 1950 with a recording of the Fourth Symphony conducted by Willem van Otterloo.

Enthusiasm and rhythmic drive were the qualities identified by early critics: emphasizing the dramatic qualities of Tchaikovskys music rather than its sheer elegance, according to Gramophones original reviewer in January 1958. Indeed, this recording of the Fourth Symphony of Tchaikovsky from February 1956 was so fleet that even the original LP had room for a filler  Smetanas Vltava  in the days when 40 minutes was considered a good-length LP (this filler has now been reissued in a complementary release on Eloquence, Doráti in Holland, ELQ4825659). The present, newly remastered reissue on Eloquence is rather more generous, and replaces the Smetana with Dorátis very first Philips recording made in September 1952, of the Pictures at an Exhibition by Mussorgsky in Ravels unsurpassed orchestration  made just days after his debut with the orchestra in concert. It went on to win an Edison Award.

Even with Willem Mengelbergs electrifying and unpredictable interpretations fresh in their collective memory, the Dutch critics were most taken with Doratis work. According to one reviewer of the Tchaikovsky, Antal Doráti had a superb orchestra all to himself and he enjoyed it. He performed with the ease of a child blowing bubbles. Documented by this album is the start of a close and fruitful musical relationship that would continue for decades and yield recordings  including the complete Nutcracker and Sleeping Beauty ballets  that have hardly been out of the catalogue since, unlike these rarities which now make their first international appearance on CD.

A winner in the technical field  with extreme clarity.  Gramophone, October 1954 (Mussorgsky)