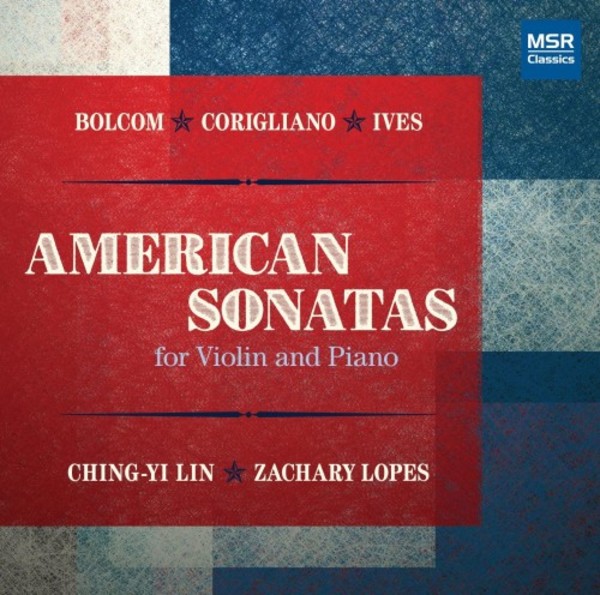 American Sonatas for Violin and Piano

Three very distinctive American Sonatas for siolin and piano. The Ives dates from 1914, the Corigliano from 1962, so an early work and the Bolcom from 1979. They inhabit a lot of moods, which Ching-Yi Lin and Zachary Lopes are alive to.

Besides being American composers, and two of them coming into this world in the same year, Charles Ives, William Bolcom and John Corigliano have something else in common: they all enjoy mixing classical and popular music, as well as tonal and atonal passages, in a unique manner.

Violinist Ching-Yi Lin maintains an active career, with notable performances and master classes at Vanderbilt University, Northwestern University, Louisiana State University, and internationally at the University of British Columbia, the Barratt Due Institute of Music in Norway, and the Shenyang and Xian Conservatories in China. During the summer months, Lin serves on the faculty at the Indiana University Summer String Academy and Western Kentucky University Summer String Institute; she has also served on the faculty of the Sommersymfoni I Kristiansand in Norway. In 2008, Lin was appointed Associate Instructor of Violin at Indiana University while also working as a teaching assistant to Mauricio Fuks. At the pre-college level, she has taught as an instructor for the Indiana University String Academy, working closely with her mentors Mimi Zweig and Brenda Brenner. In 2008, Lin acted as co-researcher, violin instructor and piano accompanist for the Fairview Project, designed to assess how underprivileged children can benefit academically and socially from learning to play the violin. She is actively engaged in presenting seminars at numerous conferences, including the national conference of the American String Teachers Association and the Kentucky and Tennessee Music Educators Association conferences. In 2013, Lin was presented with the prestigious Jefferson Award for Public Service in Washington, D.C., recognizing her work in bringing music into the lives of young people throughout her community. Lin earned her bachelors, masters and doctoral degrees in violin performance at the Indiana University Jacobs School of Music, and also studied at the Vienna Conservatory. Her principal teachers include Mauricio Fuks, Boris Kuschnir, Fredell Lack and Nelli Shkolnikova. Currently she is Assistant Professor of Violin and Director of the Pre-College Strings Program at Western Kentucky University. She plays on a Jean-Baptiste Vuillaume violin, made in 1863.

Pianist Zachary Lopes is an active soloist and collaborative artist, and has given performances and master classes across the United States, South America and Europe. He was the winner of the University of Cincinnati CollegeConservatory of Musics Piano Concerto Competition and has received awards of distinction in the Schlern International Music Competition, the Music Teachers National Association (MTNA) Northwest Regional Young Artist Competition and the University of Colorado College of Music Honors Competition. Lopes has been featured with his trio on CBS Sunday Mornings A Grand Plan for Pianos and on WUOL Classical Radio in Louisville as a soloist. Recent recording projects include Béla Bartóks Sonata for Two Pianos and Percussion and Robert Muczynskis three piano sonatas. He has presented several times at the MTNA National Conference, as well as at the MTNA Collegiate Chapter Piano Pedagogy Symposium, National Group Piano and Piano Pedagogy Forum, and Kentucky State Music Teachers Association Conference. Lopes has been published in Clavier Companion and the MTNA e-Journal. He has held teaching positions at Wittenberg University and the University of Cincinnati CollegeConservatory and served as the Assistant Administrative Director of the CCM Prague International Piano Institute. Lopes was also Directing Coordinator and Planner of the MTNA Collegiate Chapters Piano Pedagogy Symposium in 2012 and now serves on the Steering Committee for the annual conference. He received his masters and doctoral degrees in Piano Performance from the University of Cincinnati CollegeConservatory of Music and his bachelors degree from the University of Colorado at Boulder. He is currently Assistant Professor of Piano at Western Kentucky University.