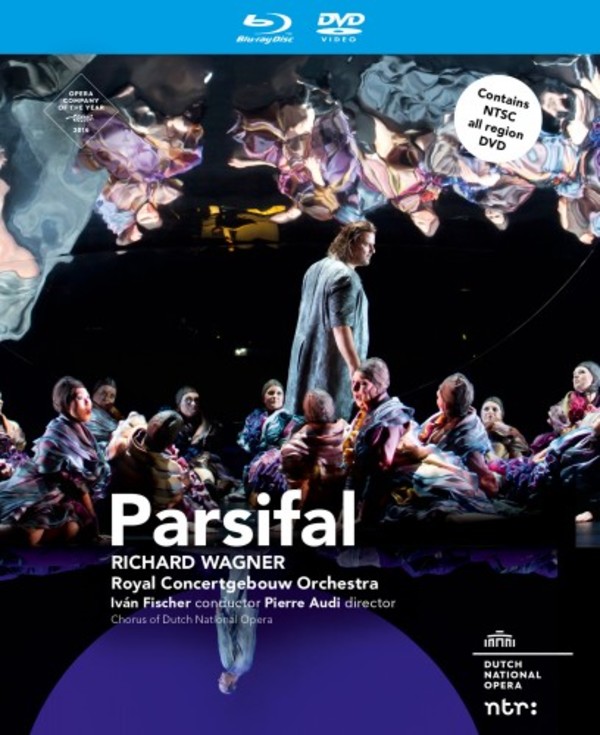 Dutch National Opera and director Pierre Audi present an outstanding account of Wagners Parsifal with a stellar cast of Wagnerian singers headed by Christopher Ventris in the title role. It is issued as a box set with both DVD and Blu-ray discs.

Iván Fischer, one of the brightest conductors on the podium today, conducts the Royal Concertgebouw Orchestra and the Chorus of Dutch National Opera. Pierre Audi, artistic director of DNO and the Holland Festival, turned to Parsifal following his legendary Der Ring des Nibelungen and Lohengrin. With sets by the famous British sculptor Anish Kapoor, Audi has cast his spell using light and space.

Wagner became increasingly absorbed by the spiritual in the later years of his life, with the topic of redemption becoming ever more essential to him. This explains the religious aspects of Parsifal, which were not universally understood during Wagners own day. The orchestral forces are massive, allowing for a wide variety of magical combinations of tone.

Alejandro Marco-Buhrmester has sung the role of Amfortas in Paris and at Bayreuth. Kurt Rydl (Titurel/Klingsor) made previous DNO appearances in Der Ring des Nibelungen and Lohengrin. Falk Struckmann has frequently sung the role of Amfortas, but now makes his first DNO appearance as Gurnemanz. The title role is sung by Christopher Ventris, who previously sang Steuermann in DNOs Der fliegende Holländer. Petra Lang (Kundry) sang Brangäne in Tristan und Isolde and Venus in Tannhäuser for DNO.

There were no weak links in the cast. Amfortas sounded suitably pained, very wobbly vibrato for it, but this very much worked. Gurnemanz was stoic and powerful. Klingsor was a rounded and full bass. Kundry has a truly bewitching voice, very powerful. Parsifal was definitely the stand out, always rising above the orchestra, his voice conveyed each emotion perfectly but was always perfectly clear and pure. Ivan Fischer's interpretation is calm, subdued, crystal clear, chamber-like. It is generally brisk, but extremely flexible, and follows Wagners tempo changes to the letter. Nonetheless, one cannot help but be carried along with the waves of music, so that the final chords are absolutely overwhelming. The Concertgebouw, characteristically played stupendously. Beautiful phrasing, incredibly unity, and they just sound so incredibly beautiful. - operalively.com

In ceremonial moments stage director Pierre Audi and his team  including artist Anish Kapoor as set designer  rightly eschew any Christian symbolism deriving from latter-day Mass rituals, opting instead (in the first Grail scene) for images of blood and sacrifice. ... As in his Ring, Audi has achieved performances of exceptional emotional detail from his soloists, none more than Petra Langs Kundry, who gives us everything apart from the high tessitura at the end of Act 2 that only Kirsten Flagstad really managed. ... Ventris too  and bravely  achieves a perfect unmannered neutrality, never rushing in voice or face the revelations that come to him from the Act 2 duet onwards. ... Well filmed and recorded, this is an essential purchase for Lang and for Audis direction, a straight but strong rival to existing competition from Barenboim/Kupfer and Nagano/Lehnhoff.  Mike Ashman
Gramophone August 2017