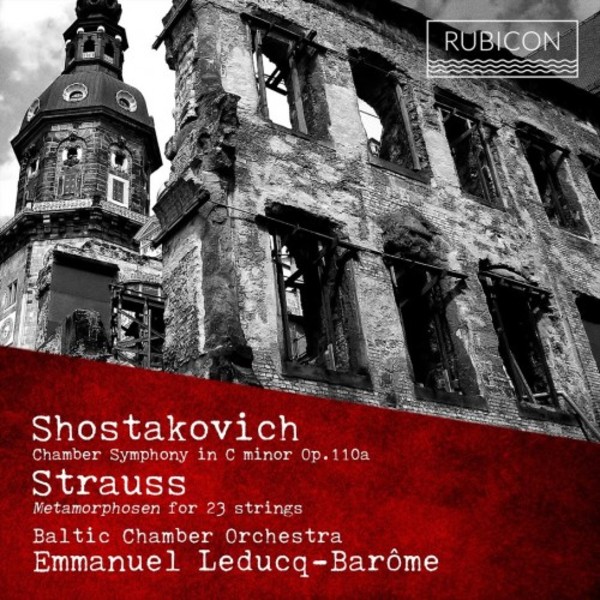 Both the works on this album came about as a reaction to the horrors of war. Shostakovich visited Dresden in 1960 and much of the city still lay in ruins. His Eighth String Quartet dedicated to the victims of fascism, is one of his most powerful and deeply personal works, quoting from earlier compositions, and using the composers musical motto D-Es-C-H. The composer wept after the first private performance: his son later suggested that the work was actually meant to be dedicated to the victims of totalitarianism. It was later arranged for string orchestra, with the approval of the composer, by Rudolf Barshai and it is this version, known as the Chamber Symphony, that appears here.

Richard Strauss, well into his 80s when the war ended, was crushed by the destruction of the great opera houses and places of learning in Germany, as the Allies defeated the Nazis. Metamorphosen for 23 solo strings is a profound and heartfelt lament for the loss of the Germany he knew as a young man; and the news that the Goethehaus in Dresden had been obliterated was the impetus for this late masterwork.

The Baltic Chamber Orchestra is comprised of the principal string players of the St Petersburg Philharmonic Orchestra. Under their French music director Emmanuel Leducq-Barôme they are one of the finest chamber ensembles in Russia and together they have made several recordings, most recently for Aparté, and concert tours in Europe. Leducq-Barome studied with conductor Mariss Jansons at the Saint-Petersburg Conservatory. In 1997 he concluded his studies there under the legendary pedagogue Ilya Musin, the mentor of several generations of conductors, including Valery Gergiev, Semyon Bychkov and Yuri Temirkanov. Since then he has held the post of principal conductor at the philharmonic orchestras of Kaliningrad and Irkutsk, in Russia.

Rarely have I been as moved by Strausss Study for 23 solo strings, his in memoriam to a severely bruised culture and to bombed Munich in particular, as I was when listening to this rich-textured recording by the Baltic Chamber Orchestra. Although the chosen tempos are comparatively broad, Emmanuel Leducq-Barôme keeps you on the edge of your seat, principally by achieving maximum tension at the crest of each phrase. ... This is the sort of CD that might profitably convert those who see concert music as irrelevant: it addresses the world as is; and if ultimately it cant spell positive closure (as, say, Beethovens Fifth can), it does at least offer some grounds for compassion.  Rob Cowan
Gramophone Awards 2017