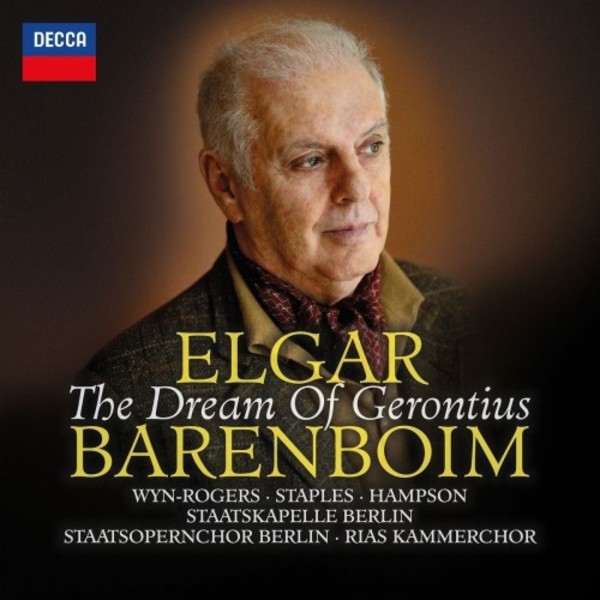 Elgar - The Dream of Gerontius

Daniel Barenboims The Dream of Gerontius is a significant addition to his critically-acclaimed Elgar series with the Staatskapelle Berlin.

Barenboim's long association with, and love for, Elgar has effectively made it part of his musical DNA - Gramophone

Barenboim made this a Gerontius of transcendental splendour - Financial Times

If anyone can make a case for Elgar outside Britain, and without special pleading, its Daniel Barenboim, returning to conduct this British composers works - New York Times

Daniel Barenboim's recent recordings of Elgars symphonies with the Staatskapelle Berlin have earned universal critical praise with their interpretative insight and depth of tone. In fact, Barenboim has long been a champion of Elgars music (he first recorded the symphonies  together with a host of other works, including the concertos  back in the 1970s), but he has only recently added one of the composers greatest works, The Dream of Gerontius, to his repertoire. He first performed it with the Berliner Philharmoniker, no less, in 2012, but this new Decca recording is taken from concert performances in Berlins Philharmonie with his Staatskapelle in September 2016. The performances themselves were marked by late cast changes: Jonas Kaufmann was originally to take the central role of Gerontius but pulled out for health reasons: then his replacement, Toby Spence, took ill as well, leading to the last-minute substitution of Andrew Staples. Meanwhile, Sarah Connolly also had to withdraw as the Angel, to be replaced by by the supremely experienced Catherine Wyn-Rogers. Of the originally planned team, only Thomas Hampson as the Priest and the Angel of the Agony remained.

Thankfully, youd never guess at these pre-performance disruptions, such is the assurance, conviction and intensity that all the artists bring to this memorable account. Staples is a light-toned Gerontius, bringing out the fragility of the old man as he approaches death in Part I, while in Part II he combines human fragility with spiritual resolution and passion as his Soul makes its journey to Purgatory. Catherine Wyn-Rogers brings all her experience in the role of the Angel to bear on this music: her voice is not as youthful as it was in Andrew Daviss recording, but it is now rich in wisdom (textual and musical) and, like Staples, her diction is crystal-clear. Her dialogue with the Soul of Gerontius in Part II is among the most memorable and affecting on disc, thanks both to the soloists themselves and to Barenboims unerring sense of the musics long line.

The scores purple passages make their mark with unusual potency, too: Hampson and the chorus of Assistants lead a rousing close to Parts I (Proficiscere Go, in the name of Angels), the chorus of Demons is thrillingly vivid with skilfully deployed rubato, and Praise to the Holiest in the height is simply glorious. The combined forces of the Staatsopernchor Berlin and the RIAS Kammerchor need fear no comparison with native British choirs, for they are both immaculately drilled (by Martin Wright and Justin Doyle respectively) and brilliantly responsive to the subtlest of Barenboims (and Elgars) nuances. Hampson is even finer as the Angel of the Agony in Part II, which better suits his stentorian tone.

Above all, Barenboim and the Staatskapelle Berlin are on the form of their lives, from the broadly-paced Prelude (richly bringing out all the once-controversial Wagnerian resonances), to the jaw-dropping moment in Part II where Gerontius is briefly granted a glimpse of the Almighty: the flash is achieved with all the controlled force one expects from such a top-notch ensemble. The closing pages have about them a radiant tenderness that stays with the listener long after the disc has stopped playing, and Barenboims direction throughout is deeply considered and imaginatively re-thought.

Traditionalists may encounter a few surprises with some of the conductors speeds (slow and fast), but this is a recording that can take its place proudly alongside the chalk-and-cheese classics of Boult and Barbirolli, combining as it does Boults resolute poise and Barbirollis passionate involvement. Among modern accounts, only Elder and the Hallé come close to Barenboims level of musicality and perception.

Following the near-disastrous 1900 premiere of Gerontius in Birmingham, it was performances in Germany that restored Elgars faith in his creation, before the work was eventually taken up by British choirs. In the years since, it has been regarded as a quintessentially British work, but Barenboims Berlin account may well come to be seen as a second homecoming for music that deserves to break loose from such labels. Elgarians of all hues should hear it without hesitation, opening their ears and minds to a performance freed from the fetters of narrow national categories. Newmans text and Elgars music deserve no less.