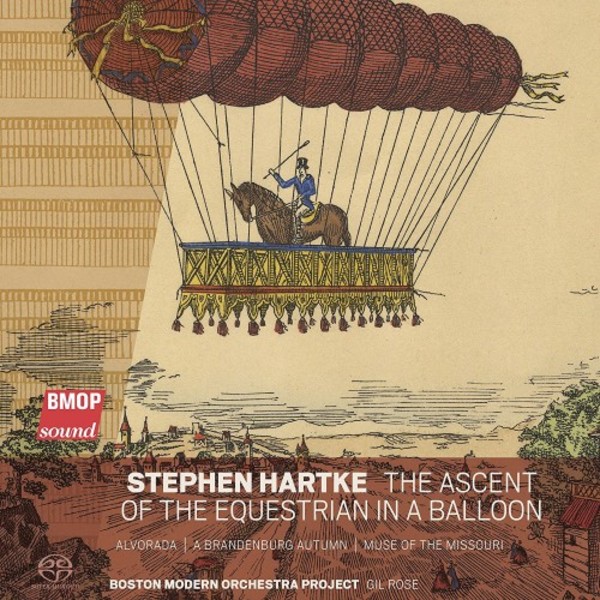 Hartke - The Ascent of the Equestrian in a Balloon

A Brandenburg Autumn
Alvorada: Three Madrigals for string orchestra
Muse of the Missouri
The Ascent of the Equestrian in a Balloon

A Brandenburg Autumn
Alvorada: Three Madrigals for string orchestra
Muse of the Missouri
The Ascent of the Equestrian in a Balloon

In revisiting this group of four orchestral pieces composed almost equidistantly over a span of thirty years, I am struck by the resurgence in each of preoccupations that have apparently remained with me since the days of my apprenticeship. Like most American composers of my generation  which is to say the ones that grew up in the
60s and 70s, the heyday of High Modernism both of the post-Webernian sort and the Cage school  I wrestled with the paradox of the innate conservatism of the avant garde and wondered why, if Schoenberg had won our musical freedom by emancipating dissonance, we young aspiring composers were given to understand that one simply did not write tonally anymore. While much music of that era was tremendously exciting and liberatingI was especially a fan of Ligeti, Messiaen, and, at that time, even Carterit could also be terribly reductive: texture and gesture came to supplant motif, which itself had already pushed aside theme and melody. The emergence of Minimalism as a potent new approach effectively emancipated consonance, but it is, of course, just as reductive, and hence has never tempted me. Instead, since the mid-70s, I have been asking myself the question what is melody for me? I began tapping into my experiences as a choral singer, especially of early music, as well as listening to how melody is conceived and elaborated in jazz and in non-Western musics.

The first movement of Alvorada (1983) was a breakthrough for me: a piece centered on the elaboration of a broad six-measure theme that alternates with variants of itself rather in the manner of medieval lyric poetry. The passages of two- and three-part polyphony are constructed over this same melody, making reference to medieval
cantus firmus composition. All told, the melody appears nine times, varied in its rhythm and metrical stresses.

Another preoccupation over these many years has been the issue of variety of affect. Ive always marveled at the interplay of emotional states in pieces such as Beethovens Eroica: the heroic and then the funereal juxtaposed with the rustic and witty. I also have found the music of Ives inspiring in this same way, often contrasting the contemplative and the descriptive, the exalted and the comical, aggression and tenderness. My four-movement piece A Brandenburg Autumn (2006), apart from being a nod to the Baroque concerto grosso, is a study both in depiction and in emotional contrast. The first movement is an evocation of a lakeside (the Wannsee in Berlin), the second a dinnertime discussion among scholars at the American Academy in Berlin, the third a stroll through the parks of Potsdam on a somber Autumn day, and the last a celebration motivated in part by having the wonderful (and rare) opportunity to write for three English horns.

The two shorter pieces are scored for the largest forces and both were intended as celebrations as well. The Ascent of the Equestrian in a Balloon (1995)was composed in honor of our son Sandys second birthday, hencethe spirit of play and energy in its deliberately Ives-like layering. The most recent piece, Muse of the Missouri (2012), takes its name from one of the many fountains of which Kansas City is so justly proud. Again,melodic unfolding is given primacy of place as a representation of the river itself and as something of a love-song to a city where I have many dear friends.
 Stephen Hartke