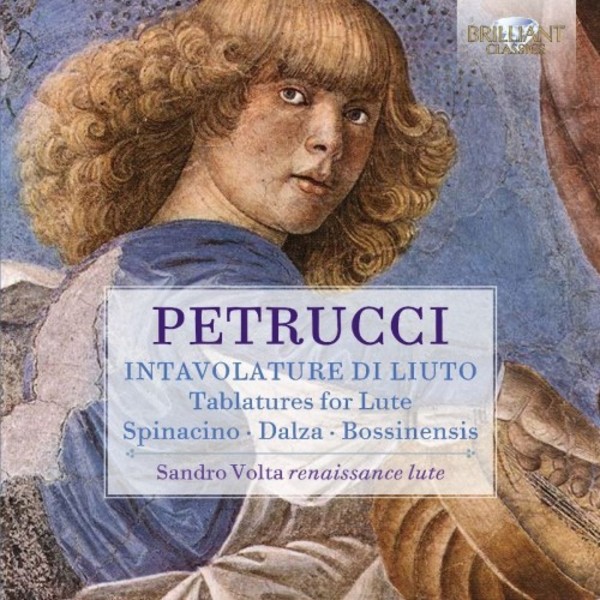 Ottaviano Petrucci was a printer rather than a composer, but his name has become synonymous with the vibrant musical culture of 16th-century Venice. He was the first significant publisher of polyphonic music, and the composers on this disc would be not only little-known but probably entirely forgotten were it not for his editions.
When the first and second books, containing work by Francesco Spinacino, appeared in 1507, they were the first ever edition of lute tablature in movable type. This was followed the next year by Giovan Maria Alemannos Libro terzo (since lost), and in 1509 by a Libro quarto by Joan Ambrosio Dalza. The Libro primo of Franciscus Bossinensiss Tenori e contrabassi intabulati col sopran in canto figurato per cantar e sonar col lauto was also published in 1509, with the Libro secondo following in 1511. (Petrucci published not only music for lute but for voices and organ).
The lutenist Sandro Volta has made a personal selection of works from each of these books. The Spinacino volumes contain 81 compositions in all  27 Ricercars and 54 transcriptions in tablature form of Franco-Flemish motets  of which we hear seven (probably original) ricercars, in which dance motifs are skilfully woven with echoes of motet melodies and contrapuntal workings. In the last Ricercar of the first book, the player constructs cadences on each of the 12 semitones of the chromatic octave: an early example of tonal experimentation that would lead to Bachs Well-Tempered Clavier and, one day far in the future, to Schoenbergs 12-tone melodies. The works by Dalza are lighter in character, forming an effective intermezzo before the visionary and original work of Bossinensis, with their gently unfolding pace and richly exploratory harmonies.
MusicWeb lavished praise on Volta for his immaculate performances: his previous recordings for Brilliant Classics testify to his expertise in the field of early music, including two volumes of music by Marco dallAquila (BC94805, BC95261) and Francesco da Milano (BC94993).