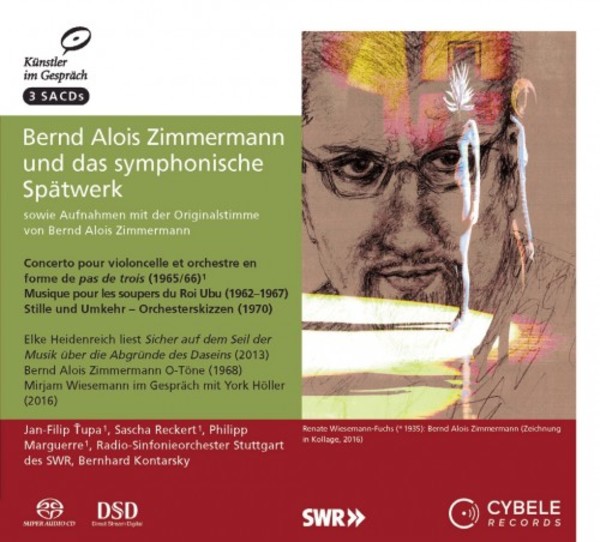 Edition Artists in Conversation Vol.8: I am convinced that all of these things, which are indeed very complex events, are designed so that every listener, no matter the intellectual or social stratum to which he belongs, will somewhere (...) be gripped

This quote by Bernd Alois Zimmermann (SACD2) was taken from a conversation between him and Prof. Herbort, restored by Cybele, which took place in 1968 on the occasion of a planned booklet text for his opera Die Soldaten in Zimmermanns house in Großkönigsdorf and which is published for the first time on this edition.

Bernd Alois Zimmermann: in many ways, performing his symphonic works is an extremely lavish undertaking. He employs infrequently-used instruments, such as the glass harmonica (released for the first time on this recording) and the Hungarian dulcimer, the cimbalom, in the Concerto pour violoncelle et orchestre en forme de 'pas de trois', for which not many performers are available. In his largest-scale endeavours, he aimed to process the most complex connections among contemporary events and his own worldview in such an intensive and comprehensive manner that each of these creations would be the only and possibly also the last. One must not forget that Zimmermann, a sensitive, profound man, had to cope with horrific and traumatic experiences during the war.

York Höller was Bernd Alois Zimmermann's last student from 19671970, precisely the years in which Zimmermann produced the late symphonic works featured on this edition. Höller, however, also talks about very personal values; his own works and perspectives; and the existential significance of artistic work. In his conversation with Mirjam Wiesemann (SACDs 2 & 3), he recalls events and impressions from these last years of the composer  Höller also observed the origins of Roi Ubu from up close (SACD 1).

At the end of SACD 1 you will hear a "modern fairy tale" by Elke Heidenreich, which the author has spoken in Cybeles studio for Zimmermanns Roi Ubu. For the performers of the three late works, the ideal musicians for Zimmermann's complex works had been gathered: under the direction of Bernhard Kontarsky, whose recording of Zimmermann's Requiem for a Young Poet on Cybele had already won many international prizes, the SWR Radio Symphony Orchestra Stuttgart brings a maximum performance. With the help of the exceptional cellist and Zimmermann expert Jan-Filip Ťupa and the glass harmonica duo sinfonia di vetro, sound worlds open up to the listener, which have never been heard before.