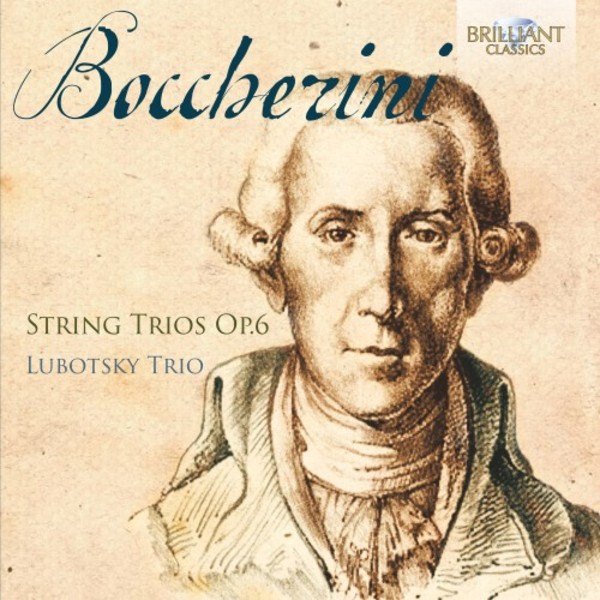 The String Trios op.6 were published in 1769. After his opp. 1 and 4 sets, they represent Boccherinis third attempt in as many years to take forward the genre of the Baroque trio sonata. He went on to write another four sets of string trios, all of which are better known and more frequently encountered on record than op.6, which makes this new recording all the more desirable for the connoisseur of Classical‐era chamber music.
No less than the later sets, the op.6 trios are characterized by a richness of melodic language, virtuosic brilliance and elegance, which nevertheless contains moments of high expression such as the chromatic Adagio which opens the G minor Trio, no.5 in the set. The sound of the two violins and cello in its fullness often approaches to that of the string quartet. Listening to these masterpieces, it is impossible not to notice the indubitable impact of his music on the great Viennese classics, first of all on Mozart.
This album represents a welcome return to the studio, and the recording catalogues, of the Russian violinist Mark Lubotsky. In English‐speaking countries, Lubotsky is renowned as the soloist on Brittens Decca recording of the Violin Concerto: a performance of idiomatic sweep which fully bears out the composers claim that this is the performance I have been waiting for. He worked with all the great Russian conductors of his generation such as Kondrashin, Svetlanov and Rozhdestvensky. Throughout his career he has played and advocated the music of our time: most notably that of his fellow student at the Moscow Conservatoire, Alfred Schnittke, who dedicated both the Second Violin Concerto and three violin sonatas to him.
However, this focus on new music should not overshadow Lubotskys mastery of the classical repertoire. This particular disposition of the Lubotsky Trio features the Swedish violinist Katarina Andreasson, though Lubotsky and the cellist Olga Dowbusch‐Lubotsky have also played and recorded Taneyev in the more traditional string trio line‐up with the violists Ferdinand Erblich and Vladimir Botchkovsky, and also as a piano trio, where they have been partnered by Schnittkes widow Irina.