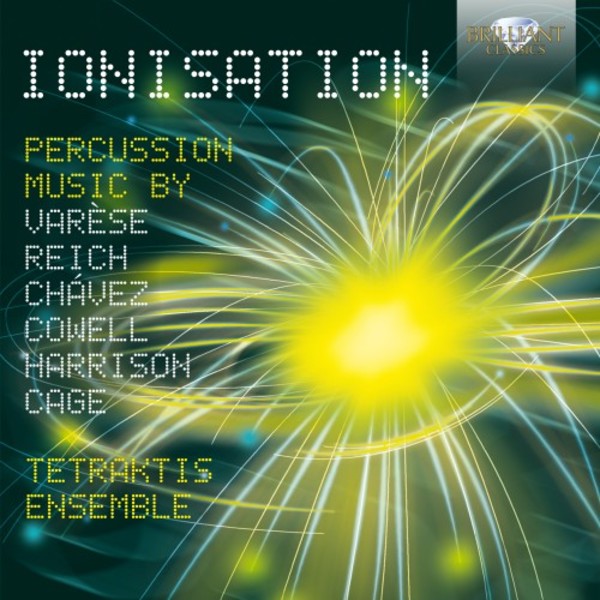 Music for Pieces of Wood

Music for Pieces of Wood

This fascinating programme brings together some of the most iconic percussion music by Varèse, Reich, Cowell, Chávez, Harrison and Cage, written in the 30s and 40s of the 20th century.
The composers on this disc share their American identity, deriving their inspiration from such diverse sources as medieval music, African culture, astrophysics, Latin‐American and Mexican music.
The albums title derives from the mould‐ breaking work of Edgard Varèse. Composed in Paris between 1929 and 1931, Ionisation was written for 13 players (reduced here to six in an arrangement) and melded a huge array of instruments from all the percussion families  whether made of wood, metal, skin or plastic  into a single sound, striated with shimmering detail.
The remainder of the album gathers up 20th‐century American classics, several of them written in the wake of Ionisation. Henry Cowell composed Pulse in 1939, Lou Harrisons Song of Quetzalcoatl and John Cages Third Construction both date from 1941 and the Toccata by Chávez from 1942. Each has its own, muscular idiom, and each uses the available, kaleidoscopic variety of instruments in its own original way.
The polymetric structure of Pulse or Third Construction, the use of Asian instruments, the focus on sounds from beyond the classical sphere, and the oscillating rhythms that seem to imitate the freedom of improvisation all appear to be precursors of developments that gained recognition during the 1970s and 1980s, and especially in the work of Minimalist composers such as Steve Reich, for whom Music for Pieces of Wood (1974) was another breakthrough piece, making rhythmically complex music from the simplest possible means. Indeed, rebellion from established European norms of structure and harmony is a signal characteristic of every work on the album.
Over the last 20 years, the Tetraktis Ensemble has made a name for itself in Italy and abroad as a percussion group of particular virtuosity, playing a diverse repertoire that embraces the classical universe (Bartók, Cherubini, Stravinsky), jazz and pop.
Tetraktis is one of the most innovating and ground‐breaking percussion groups of today. They work closely together with contemporary composers and freely adopt influences from other musical cultures like rock, pop, jazz and dance. They regularly perform in festivals all over the world.