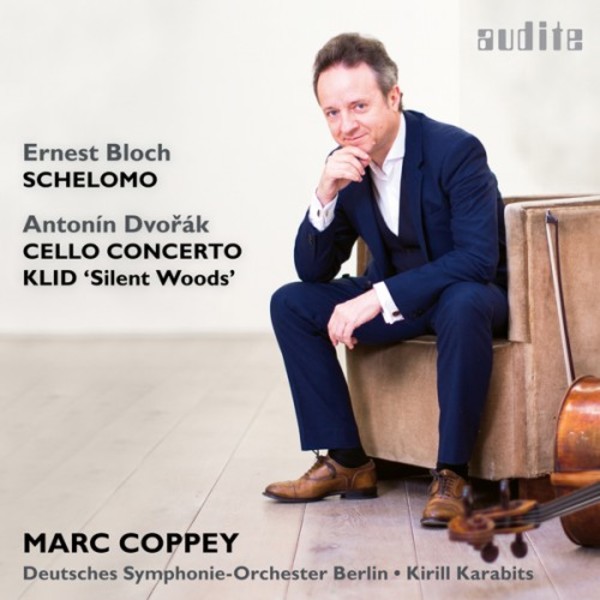 Departing from home: in Schelomo, Bloch examines his cultural and religious roots; in his Cello Concerto, Dvořák illustrates both his old and his new native countries, whilst the forest scene Klid (Silent Woods) represents a bridge and also an atmospheric reminiscence.
Having spent nearly two decades playing solo recitals and chamber music, as well as performing alongside renowned orchestras, Marc Coppey turns to three classics of the cello repertoire. Following the album of cello concertos by Haydn and CPE Bach, Audite now presents its second disc with the French cellist.
In all three works, the composers look from Europe to America and vice versa: Blochs Schelomo was written immediately before his crossing to America; Dvořák composed his B minor Cello Concerto only once he had arrived there. Klid sits in between: before departing for America, Dvořák arranged this work, originally for piano duet, for cello and piano, to be played during his farewell tour. In this format, the piece became so popular that he went on to produce an additional version for cello and orchestra.
Antonín Dvořák and Ernest Bloch provide clear performing instructions, but also demand a high degree of free interpretation. Marc Coppey manages to realise both of these aspects, maintaining a convincing balance and communicating intensively with the orchestra. He does not need to demonstrate his virtuosity through overly hasty tempi: instead, he follows the recommendations found in the scores. This greatly benefits the clarity, vividness and eloquence of his interpretations. The Deutsches Symphonie-Orchester Berlin and Kirill Karabits prove congenial partners.

On fine form, Marc Coppey aptly demonstrates his prowess with these Bloch and Dvořák scores but the competition is extremely fierce especially in the Cello Concerto, a masterwork of the repertoire.
MusicWeb International 31 October International