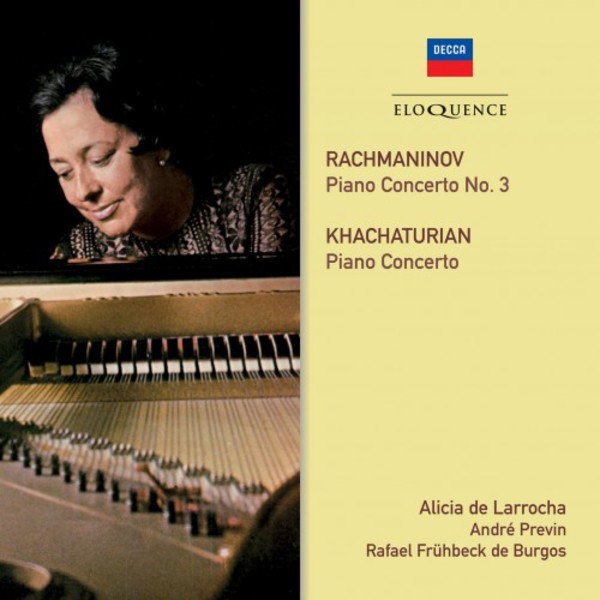 Although Alicia de Larrocha was justly crowned in her own lifetime as the Queen of Spanish piano music, the larger-scale Romantic concertos were also within her repertoire during the first half of her long career, until her finger-span could not accommodate the outsize hand-stretches required by Rachmaninovs music in particular.

To such works as Eloquence has reissued in a series devoted to her Decca recordings, Larrocha brought the same articulate clarity, palette of colours, rhythmic buoyancy and depth of expression that distinguished her recordings of Albéniz and Granados. As Raymond Tuttle remarks in the booklet-note appreciation of de Larrochas art, these recordings, made during her glory days, remind us once again of her versatility and how completely she identifies with this music.

Along with Brahmss Second, the Third Concerto of Rachmaninov is the most arduous and demanding within the central repertoire, both on account of sheer length and the torrents of notes with which the concertos passion is poured out. While fully in command of such passages as the famously taxing first-movement cadenza, however, Larrocha unerringly locates the more playful side of the concerto as well as giving the slow movement a performance of especial, limpid grace. In this she is aided by insightful accompaniment from the London Symphony Orchestra and André Previn, who became prized as Rachmaninov interpreters during the 1970s through celebrated accounts of the symphonies and the concertos (with Ashkenazy).

As the critic Felix Aprahamian once observed, Alicia de Larrocha never puts a finger wrong: true no less in the more unfamiliar territory of the concerto by Aram Khachaturian, which enjoyed decades of popularity after its composition in 1936 before the composers Armenian-tinged, cinematically conceived Romantic idiom fell out of fashion. At the climax of the impassioned slow movement, its sweeping melody is played on both piano and flexatone, a musical saw which produces unearthly glissandi, somewhat like an ondes martenot.

The slow movement of the Piano Concerto as interpreted by a Spanish pianist and a Spanish conductor sounds evocatively like Falla and the finale is also infectiously jaunty. - Penguin Guide, 1996 (Khachaturian)