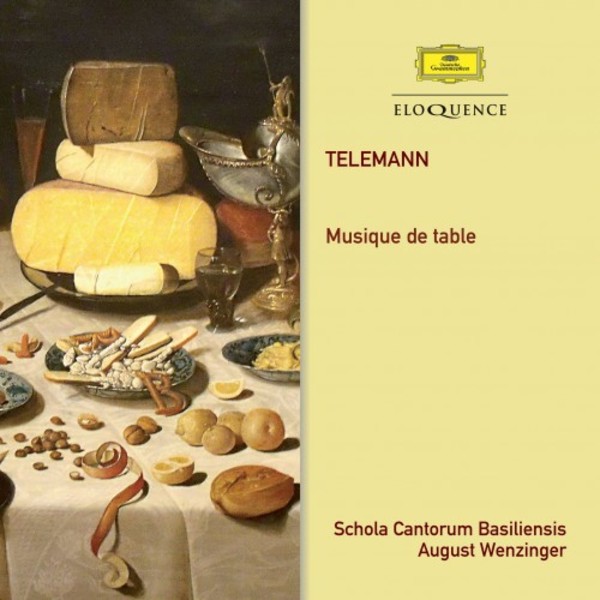 Back in 1950 August Wenzinger was flying the flag for Telemann at a time when the composers sheer fertility of invention defeated most musicians and listeners (perhaps it still does). He noted that the composers creative power was to be found in his personal motto, Pleasure and diligence: qualities to be appreciated in abundance in the first complete recording of the Musique de Table (Tafelmusik) which Wenzinger made in 196465.

It is here reissued (internationally) complete for the first time, in a new remastering and complemented by extensive booklet notes detailing the instruments and musicians of the Schola Cantorum Basiliensis founded by Wenzinger in his home city of Basle, together with an extensive appreciation of both composer and conductor by the scholar Nick Morgan.

The Musique de Table is a three-volume, four-hour compendium of suites, concertos, sonatas, trios and quartets for a vivid array of instruments  most of which Telemann could play himself with great skill  first published in 1733. A French-style overture introduces each volume, and there follows a profusion of contrasts  loud and soft, winds and strings, courtly and rustic  which well suits Wenzingers collegial style of musical leadership. He gathered round him many period-instrument luminaries of the day such as the violinist Eduard Melkus, the recorder-player Hans-Martin Linde and the trumpeter Edward H. Tarr. Nikolaus Harnoncourt and Frans Brüggen both made recordings of the collection which became more celebrated, and after them prominent Baroque musicians of each generation, but Wenzingers pioneering effort contains far more than historical interest.

Wenzinger had behind him a decade of recording Telemann for the Archiv sub-label of Deutsche Grammophon when he came to set down the Musique de Table, not to mention four decades of studying and playing on historical instruments, and teaching and conducting other performers on them: a life of industry almost as superhuman as Telemanns. Reviewing an earlier album of the celebrated Hamburger Ebb und Fluht Water Music, Gramophone encouraged sceptical listeners: If anyone still entertains doubts about Telemanns ability as a melodist and orchestrator, or about the efficacy of old instruments properly integrated into modern performances, they should listen to this magnificent record. These are words that hold good for the Musique de Table, no less now than in September 1962.

Wenzingers ensemble gives it exactly what is needed for a good Telemann performance: delicacy with firmness, attention to detail, reasoned tempos that neither drag nor flit by, and an understanding of the composer and what he was about. - Fanfare July/August 1982 (Concertos in A, in F and E flat)