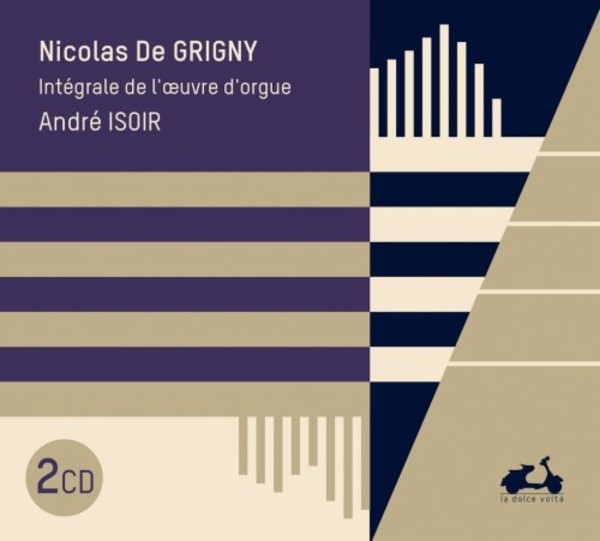 Composed of a Mass and five Hymns, the Livre dOrgue of Nicolas de Grigny (1672-1703), published in 1699, is one of the high points of the French Classical organ literature. The collection is remarkable for the density of its style, which combines learned counterpoint with a bold and sumptuous harmonic language. It is hardly surprising that Bach himself personally copied out this work by the Reims-born composer, thus conferring on him a distinction unique in the entire French organ school. André Isoirs version, recorded by Georges Kisselhoff in 1972, offers the ideal introduction to Grignys world.
When you go into a church and see those great metal pipes gleaming in the shadows, and then imagine one man making all of that work, you really want to be that man yourself. You have to admit that the organ is an instrument you get attached to.
Born in Saint-Dizier, north-eastern France, in 1935, André Isoir studied music at the Ecole César Franck, where Edouard Souberbielle was his organ professor and Germaine Mounier taught him piano. He died in 2016 on his 81st birthday. Isoir leaves a significant recorded legacy, including a comprehensive survey of the organ works of Nicolas de Grigny, an acclaimed César Franck series, on the organ of Luçon Cathedral, and the Saint-Saëns Organ Symphony with the NHK Symphony Orchestra Tokyo. But it is as an interpreter of the works of JS Bach that he will be primarily remembered: his recordings on the Calliope label (recently reissued on La dolce volta) are widely regarded as some of the finest interpretations of these works on disc, winning numerous prestigious awards including the Choc de lannée prize in 2000 and many Grands Prix du Disque throughout the 1970s and 80s.