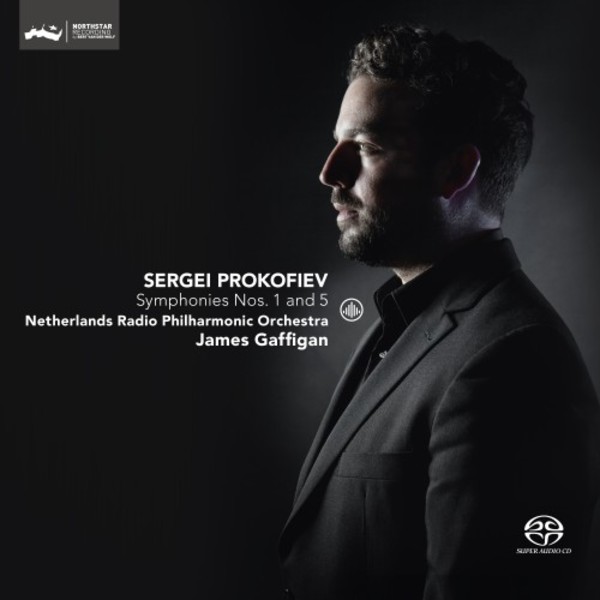 Nos. 1 and 5 are surely the most famous and beloved of Prokofiev's symphonies. They were written in a time-span of 27 years (the former in France, the latter in Soviet Union) and they display two much different faces of the composer's musical personality.

The image Sergei Prokofiev seems to project, particularly when it comes to the music he wrote while living in the West from 1914 to 1935, is one of a joker and an agitator, yet a classical composer at the core. This double identity can be heard even in his earliest works, mostly for piano, written before 1914, and was sealed with his Classical Symphony in 1917. The subtitle is the composers own. Indeed, Prokofiev stated, I wanted to write a symphony that Haydn or Mozart would have written had they lived in the twentieth century.

Prokofiev wrote the Symphony No.5 in the Soviet Union in 1944, when the Nazis were increasingly losing ground but had certainly not yet been defeated. Although the symphony lacks a programme per se, it is undeniably a depiction of war and victory. Heroism is always tinged with the tragedy inherent in war (and vice versa), and the grand gesture is both sincere and theatrical.

The Netherlands Radio Philharmonic Orchestra (RFO), founded in 1945, is an essential link in the Dutch music life. The RFO performs symphonic concerts and operas in concert, as well as many world- and Netherlands premieres.

The RFO has build an extensive CD catalogue, with works by contemporary composers such as Jonathan Harvey, Klas Torstensson, James MacMillan and Jan van Vlijmen, the recording of Wagner's Parsifal, Lohengrin, Die Meistersinger von Nürnberg. Complete symphonies of Bruckner, Rachmaninow, Shostakovich and Hartmann have been released in recent years.