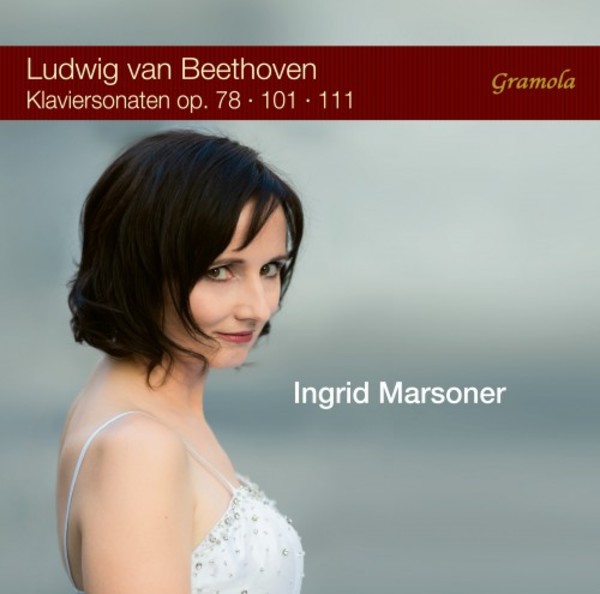 Following on from her recording of piano concertos by Hummel and Beethoven, Austrian pianist Ingrid Marsoner presents her interpretations of late piano sonatas by Beethoven. Marsoners subtle yet vigorous playing opens the disc with Sonata No.28 in A major, op.101. The Rondo alla ingharese, quasi un capriccio, op.129, is better known by its popular name Rage over a Lost Penny and is an earlier work, as is the lighter Sonata No.24 in F sharp major, op.78, which provides a welcome intermezzo and an interesting contrast to the somewhat more profound late sonatas featured. The final track, Sonata No.32 in C minor, op.111, the last of Beethovens piano sonatas, features two highly contrasting movements.

Austrian pianist Ingrid Marsoner is blessed with a musical sensitivity rarely found in the younger generation. Without any mawkishness, she is capable of moving listeners with Franz Schubert, accomplishing structural and atmospheric miracles with Johann Sebastian Bachs Goldberg Variations, unfolding an amazing energy in musical competition with symphony orchestras and then, when she dips into the subtleties of a Mozart sonata or a modern impression, differentiating the finest nuances so fluently that the famous borderline between musical art and music once more completely loses its validity. She has received major musical inspiration from other eminent pianists such as Tatiana Nikolayeva, Paul Badura-Skoda and Alfred Brendel. Competition successes and invitations to competition juries soon followed. She has been awarded First Prize at the Steinway Competition and the Jeunesse Competition in Vienna, and was also presented with the Big Prize, awarded for a performance of an exceptional quality, for her interpretation of Schumanns Kreisleriana at the Young Artists Peninsula Music Festival in Los Angeles. She was also invited to join the jury of the International Johann Sebastian Bach Competition in Leipzig.