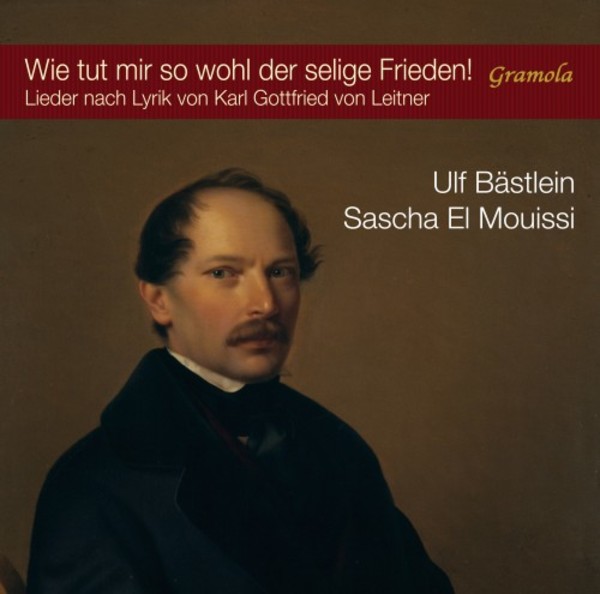 Karl Gottfried von Leitner (1800-1890), born in Styria, Austria, was not granted a great breakthrough as a writer throughout the course of his long life: the audiences taste changed too rapidly, there was a lot of competition, and from the middle of the century he had to endure ubiquitous censorship. Nevertheless, he inspired numerous composers to adapt his lyrics such as Franz Schubert, Albert Stadler, Robert Fuchs, Franz Paul Lachner, Sigismund Thalberg and Anselm Hüttenbrenner. On this double CD, German bass baritone Ulf Bästlein and pianist Sascha El Mouissi present songs by different composers who set von Leitners lyric poetry to music. As quasi-interludes the singer recites further poems by the Austrian writer.

Ulf Bästlein has been awarded several prizes, including at the VDMK singing competition in Berlin and the Nürnberger Meistersinger competition. He has sung in almost every European country and frequently appears as a guest at international music festivals. His wide repertoire ranges from Monteverdi, Bach, Handel and Mozart up to contemporary compositions. Numerous recordings testify to his versatility as a performer. In 1999 he was appointed to the post of Professor at the Musikhochschule in Lübeck and in 2000 he was also appointed Professor of Singing at the University of Music and Performing Arts in Graz, Austria. Ulf Bästlein regularly leads masterclasses both in Germany and abroad.

Sascha El Mouissi has just completed a busy international concert schedule and has been invited to numerous festivals, such as the Festwochen in Vienna, both in Germany and abroad. His concert tours have taken him to England, France, Italy, Austria, Switzerland, and Marocco. In addition to his solo piano performances, he can be seen as a chamber musician and, most often, as the piano accompanist for renowned vocalists. Several recordings have been broadcast on radio in Germany and Austria on the SWR 2 and ORF. Sascha El Mouissi has performed in masterclasses with vocalists KS Marjana Lipovsek, Andreas Scholl, KS Axel Kohler, Michael Hofstetter, Claudia Eder and Paul Edmund-Davies. He is currently teaching at the University for Music and Performing Arts in Graz.