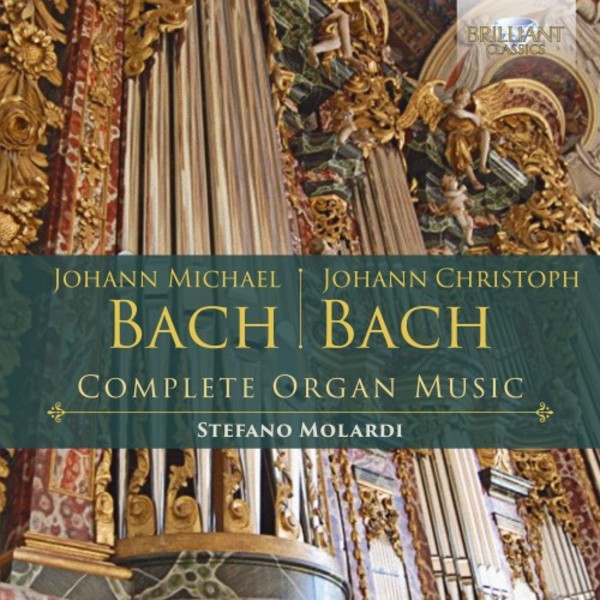 A previous Brilliant Classics release from the organist Sergio Militello (BC94483) offered an attractive taster course to the music of the most distinguished family in music history. Now, having recorded the complete organ works of both the familys supreme craftsman and genius (BC95105), and a North‐German predecessor Johann Kuhnau (BC95089), Stefano Molardi turns his attention to two earlier members of the Bach family who have inevitably been obscured by the shadow cast by Johann Sebastian.

In fact as uncle to J.S., Johann Christoph Bach (1642‐1703) exercised a significant influence over his musical education, as composer, organist and indeed organ‐designer. Sacred vocal works such as the Requiem have been revived in recent times, but the scant surviving proportion of his keyboard music has received too little critical attention. They comprise a prelude and fugue, and three cycles of variations on chorales. The free pieces reveal an inventive spirit, fantasy, a certain skill in handling counterpoint and the use of expressive devices which show him no less open than his nephew to the exuberant vitality of the Italian tradition represented by Frescobaldi and Monteverdi.

Brother of Johann Christoph, Johann Michael (1648‐1694) was also father to the Maria Barbara who became Johann Sebastians first wife. He too worked in the town of Arnstadt where the 18‐year‐old Johann Sebastian took up his first post in what is now appropriately known as the Bach Church. Doubtless J.M. Bachs production was no less industrious than his brother, if scarcely matching his nephew, but the only extant organ works are chorale settings  24 of them  which elaborate flowing counterpoint over and around the familiar hymn melodies such as In dulci jubilo and Ich ruf zu dir, Herr Jesu Christ.

On this release, Stefano Molardi plays a finely preserved instrument from 1732‐37 by Franciscus Volckland in the Cruciskirche of Erfurt, just a quarter‐hours car drive from Arnstadt. In considering the fourth volume of Molardis Bach survey (BC95005), Early Music Review took note of the Erfurt organs striking variety of tone colour, and praised his playing for its considerable clarity and lack of histrionics, without extremes of registration or tempi  just what you need for the purposes of study or reference.

This is one for the library.
Choir and Organ