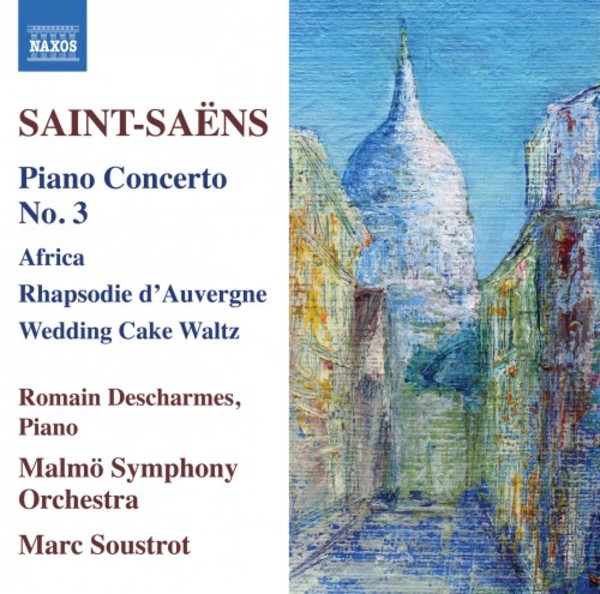 The Third Piano Concerto has been considered the Cinderella among Camille Saint-Saënss five works in this genre, but it owes its comparative neglect to an adventurous approach to harmony which caused unrest in the audience at its première. Daring enough in the first movement, the search for tonality in the second was such an extreme experience that it caused unrest in the audience at its première. Saint-Saëns also composed for piano and orchestra in more rhapsodic forms, exploring folk tunes and rhythms from Africa, and revealing his playful side in the charming Wedding Cake Waltz. Volume 1 can be heard on 8573476.

The Third Piano Concerto is one of the least recorded of Saint-Saënss works in this genre, usually included only as part of box set collections of all five concertos. Appearing as it does here with rarely heard works for piano and orchestra such as the folksong-based Rapsodie dAuvergne that pre-dates Canteloubes famous Chants dAuvergne by around 40 years, this is the sort of programme that will have a wide stand-alone appeal as well as being part of our eminently collectable complete concerto edition.

This is the second of a three volume edition of Saint-Saënss Piano Concertos and other works for piano and orchestra, the first of which was released in March 2017 (Naxos 8573476). This new edition competes with classic recordings such as those with Charles Dutoit and Pascal Rogé (Decca) and André Previn and Jean-Phillipe Collard (EMI/Warner), but will be the first complete collection to appear for at least a decade, made all the more competitive with its numerous additional works.