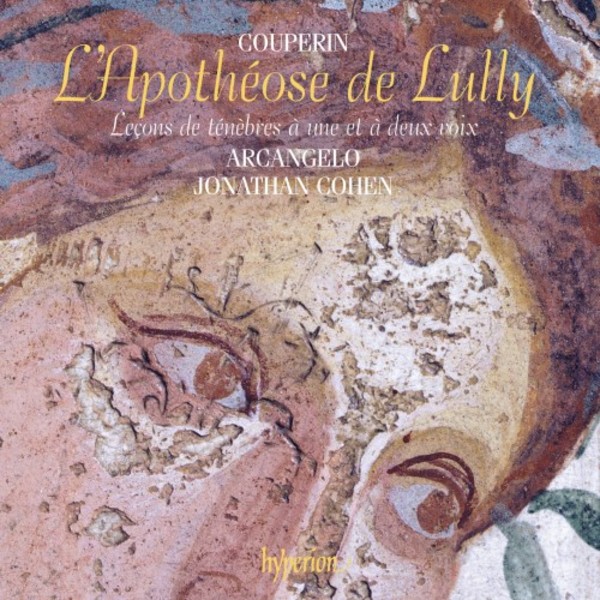 LApothéose de Lully was Couperins homage to his great musical predecessor and depicts the elder composers elevation to Mount Parnassus (where he plays duets with the shade of Corelli and, with Apollos blessing, effects a reconciliation between the contrasting French and Italian styles of the day). The Leçons de ténèbres were written for performance in Holy Week and demand  and here receive from Katherine Watson and Anna Dennis  vocal artistry of the highest order.

François Couperin (1668-1733) might be best known today for his keyboard music  27 Ordres of harpsichord pieces, many with descriptive titles  but there are many precious jewels in his sacred and chamber works too, as this new disc from Arcangelo under director Jonathan Cohen amply demonstrates. Almost throughout his life, Couperins music combined French grace and expressiveness with Italianate formal traits, and he consciously strove for a juxtaposition and even combination of the two national styles, an aim which he famously described as les goûts-réünis: the reunited tastes. Both works on this disc show this endeavour in action, and they make for a sumptuous musical feast.

Couperin appears to have written three sets of Leçons de ténèbres (each comprising three leçons) for Holy Week services at the royal abbey of Longchamp near Paris around 1715, but only the first, for Maundy Thursday, survives, as it was the only set to be published. The leçons take their texts from the Lamentations of the prophet Jeremiah, and were performed on the afternoon of the previous day (in this case, on Wednesday of Holy Week). With opera performances banned during Lent, operatic singers were paid to make the journey to Longchamp and sing these works, and the congregation paid handsome prices for places in the pews at these fashionable gatherings.

Couperins leçons are in the French style established by Lambert and consolidated by Charpentier, but they include Italian elements too, both in their formal organisation and in their frequent use of harmonic and melodic sequences. Like other composers, Couperin also set the initial Hebrew letter of each verse to long, often sensuous melismas, and these passages are among the works most striking features, together with the intense expressiveness of the whole. The first two lessons are for soprano and continuo, while the third calls for two sopranos. Accompanied sensitively by Arcangelos instrumentalists (lute, viola da gamba and organ), sopranos Katherine Watson and Anna Dennis take turns with the first two lessons, Watkinss softer grained voice being heard in the first and Denniss brighter instrument in the second, before they combine forces in the third. Their voices are beautifully matched, and the opening melismas in the third set are highlights of the disc: try the opening of tracks 29 onwards and prepare to be completely beguiled. Among several notable recordings of these pieces over recent years, the present ones are unquestionably among the finest, and their quiet, restrained intensity is profoundly affecting.

It was an inspired choice on Cohens part to couple the Leçons de ténèbres with one of Couperins greatest chamber works, the instrumental concert LApothéose de Lully. It celebrates Couperins great French predecessor  the father of the French baroque style  and imagines his posthumous reception on Mount Parnassus, where he is united with his Italian counterpart, Arcangelo Corelli, and the god Apollo effects a musical rapprochement between the two national figureheads and styles. Inspired, too, was the choice of acclaimed French baritone Stéphane Degout to recite the programmatic descriptions that head most of the movements, so that anyone with a smattering of French can easily follow events as they unfold.

Once again, Arcangelos approach is a restrained one where instrumentation is concerned: just two violins on the upper instrumental parts, plus a continuo group of viola da gamba, lute and harpsichord. Yet such is the sensitivity of these players to shadings of instrumental colour that the action is vividly illustrated throughout, from the airy flight of Mercury to the Champs Elysées (track 3) to the throbbing subterranean rumblings of Lullys contemporary critics, and their exaggerated sighs (tracks 5 and 6). Theres a tangible sense of jubilation to the four-movement Sonade en Trio that concludes the works, and for a performance that combines technical polish and effervescent spirit, this one now leads the catalogue.

Recordings are first class, and a detailed note from Graham Sadler (an expert in French baroque music) graces the booklet. Unhesitatingly recommended!

Couperin was preoccupied with combining French and Italian musical styles, and as soon as Corelli comes into view the musicians start playing with equal quavers rather than the lopsided inégal ones favoured by the French  almost a shame, given that those pesky French quavers are played with such a delightfully relaxed shrug by harpsichordist Jonathan Cohen and his four Arcangelo musicians. But you need know nothing of that to enjoy the grace and immediacy of the playing, or the charm of the music. Couperins three Tenebrae lessons, written for opera singers rather than clerics, are almost as beguiling, and beautifully sung here by sopranos Katherine Watson and Anna Dennis.  Erica Jeal
The Guardian 4 May 2017

One of the particular delights of Cohens Arcangelo is the idiomatic continuo-playing of the lutenist Thomas Dunford. From the outset he assumes the dominant role in elaborating the bass, rather than Cohen at the harpsichord. That this was a deliberate artistic decision is borne out by the inner logic of the instrumentation in both works on this disc. ... Cohen has created a magical, delicate palette of chamber music colours with merely two violins and continuo. In the Vol de Mercure and the Enlévement de Lulli au Parnasse, the solo lute accompaniment adds to the sense of moving through air.  Julie Anne Sadie
Gramophone May 2017