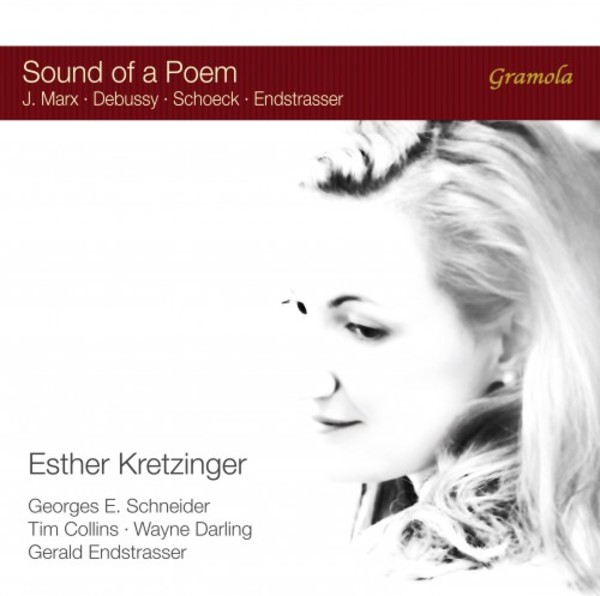 Sound of a Poem: Songs by Marx, Debussy, Schoeck, Enstrasser

After attracting attention with her clear soprano voice in the classical and opera genre, German singer Esther Kretzinger discovers new paths with her second album Sound of a Poem. Together with a small jazz ensemble of international repute, she sheds new light on a special selection of Romantic and Impressionist songs by Claude Debussy, Joseph Marx and Othmar Schoeck. With the Swiss violinist Georges-Emmanuel Schneider, New York vibraphonist Tim Collins, renowned bassist Wayne Darling and Austrian drummer Gerald Endstrasser, Esther Kretzinger works out the essence of these songs in the language of jazz, showing that the differences between Impressionist music and jazz often lie more in external features such as sound colour, articulation and instrumentation rather than their artistic cores.
Esther Kretzinger, who was awarded the Lilli Lehmann Medal of the Internationale Stiftung Mozarteum and has won several prizes in national and international singing competitions, has had a distinguished music career. She concentrates in particular on the music literature of the 19th and 20th century, and on contemporary music. Slovenian composer Peter Kopač dedicated his work Waldseligkeit for soprano, violin and piano to her, which was premiered in 2012 in the Sokolski Dom Culture Centre in kofja Loka. Most recently the soprano has performed works by John Cage, Morton Feldman, Henryk Górecki, Giacinto Scelsi, Mathias Spahlinger and Sir John Tavener amongst others at the Giacinto Scelsi Festival Basel, Tage Neuer Musik Graz, Salzburger Kunstverein and at the Neue Musik festival in Stadthaus Ulm. As well as giving recitals Esther Kretzinger also released her debut CD Lieder im Volkston featuring works by Johannes Brahms, Antonín Dvořák, Béla Bartók and Zoltán Kodály with Gramola in 2011. Her artistic activity is focused in particular on lieder recitals and chamber music concerts. In 2014 she set up the international chamber music series Weissenhorn Klassik and has been the artistic director since its creation.