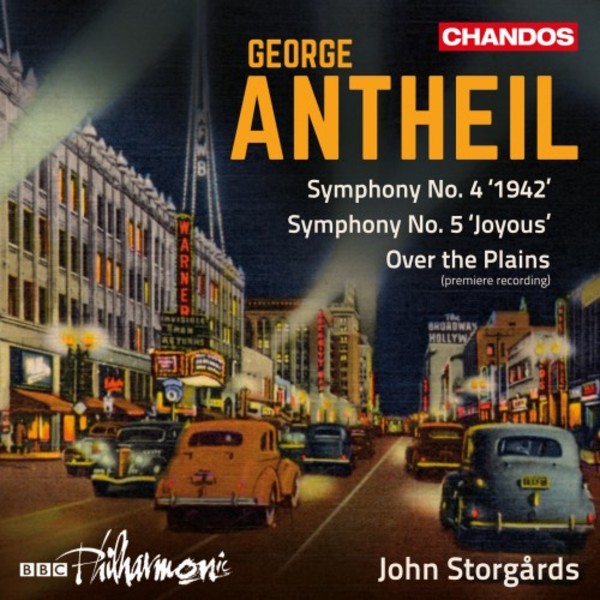 Alongside its ongoing much-lauded Copland series, the BBC Philharmonic embarks on a new American journey, this time with its chief guest conductor, John Storgårds.

Known as the bad boy of music, George Antheil began his career with a reputation as an enfant terrible, composing shockingly avant-garde works such as his ever-popular Ballet mécanique, inspired by the dynamism and dissonances of Stravinskys early ballets. Although he is well-established on the film music scene, too, it is his symphonic output  sampled here  that today survives in the concert hall.

This new series documents the evolution of his musical style, which moved towards a fundamentally tonal and melody-based idiom, Antheil joining the growing ranks of famous US symphonists. The war-inspired Fourth Symphony and joyous Fifth clearly represent this compositional shift, breaking with what the composer called the now passé modernism.

Also here is the premiere recording of the Texas-inspired Over the Plains, memorable for its allusions to cowboy music and offering some unexpectedly dramatic and atmospheric twists along the way.

Rather than placing these symphonies squarely in the mid-century mainstream, as Wolff does, John Storgårds revels in their idiosyncrasies, revealing a wealth of expressive detail Id never heard before. In Storgårdss hands, the stark and often macabre juxtapositions of the Fourth Symphony (1942) suggest that Antheil knew Mahlers music very well, and not just the Mahlerian aspects of Shostakovichs work. ... A brilliant recording all around, and an important one. Bring on the next instalment!  Andrew Farach-Colton
Gramophone June 2017