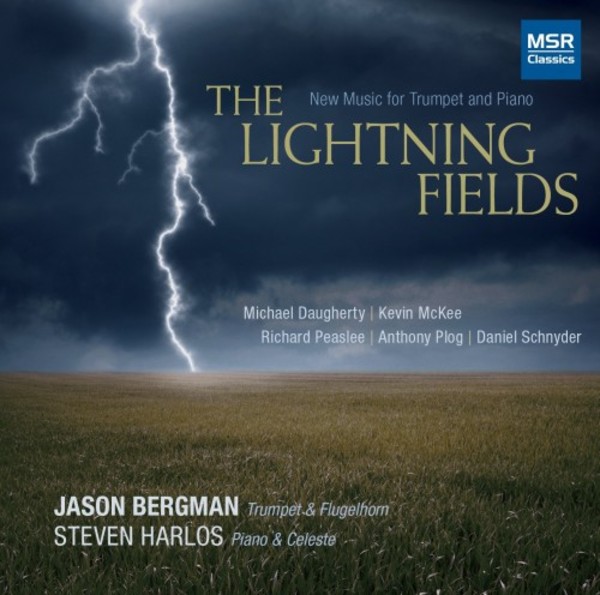 Song for a Friend
The Adventures Of... for unaccompanied trumpet

Song for a Friend
The Adventures Of... for unaccompanied trumpet

Similar to Jason Bergmans critically acclaimed On The Horizon album of 2013, The Lightning Fields is a recital of significant new works for trumpet and piano. Michael Daugherty, Richard Peaslee, Anthony Plog, Daniel Schnyder and Kevin McKee are among the most active, highly regarded composers of our time, and their work has been proven to be popular and successful. The recordings here, the majority of which are world premieres, document these important works in each composers oeuvre for the trumpet.

American trumpeter Jason Bergman has performed throughout the United States, and in South America, China and Europe, including Great Britain. Most recently, he served as Principal Trumpet of the Mobile Symphony Orchestra and Mobile Opera. He has previously been a member of the Ann Arbor Symphony Orchestra, Gulf Coast Symphony and Saginaw Bay Symphony Orchestra. An active performer in the north Texas region, he frequently performs with the Dallas Symphony Orchestra, Dallas Opera and Dallas Winds, among other ensembles. In 2008, Bergman was named Associate Principal Trumpet of the Santiago Philharmonic in Chile, where he performed during their 2008 season. Additionally, he has performed in concert with the Canadian Brass, Rhythm & Brass and with conductor David Robertson at Carnegie Hall as part of the Weill Music Institute. He also enjoyed performing as a fellow at the Music Academy of the West in Santa Barbara, California. Bergman was a prizewinner in the International Trumpet Guild Orchestral Excerpt Competition, and a national finalist in the MTNA Young Artist Brass and Chamber music competitions. Additionally, he has been a semi-finalist in the National Trumpet Competition. Bergman has performed as soloist with the Garland Symphony Orchestra; UNT Symphonic Band; The University of Southern Mississippi Symphonic Winds; Brigham Young University Philharmonic, Wind Symphony and Symphonic Band; and Beijing Central Conservatory of Music Wind Ensemble. As an educator, Dr. Bergman has taught at the Grand Valley International Trumpet Seminar and Blue Lake Fine Arts Camp in the United States, and at the Música nas Montanhas Festival in Poços de Caldas and Festival de Música de Santa Catarina in Brazil, and the Semana de la Trompeta Peruana in Peru. He is also an adjudicator with the National Trumpet Competition. Bergman has given recitals and master classes at numerous institutions worldwide and he has performed or presented clinics at conferences of the International Trumpet Guild, College Music Society, International Tuba and Euphonium Conference, Mississippi Bandmasters Association, Mississippi Music Teachers Association, and the Texas Music Educators Association. Committed to research, Bergman is a contributing author for the Grove Dictionary of American Music, Second Edition. He is editor of the Orchestral Section Profile, and a Sheet Music and Recording Reviewer for the International Trumpet Guild. His music arrangements have been published by Eighth Note Publications. Bergman joined the music faculty of the University of North Texas as Assistant Professor of Trumpet in August 2015. Prior to that, he was the Nina Bell Suggs Professor of Trumpet at the University of Southern Mississippi for five years. He is also a faculty member of the Idyllwild Arts Chamberfest during the summer. Bergman holds a Bachelor of Music degree in Trumpet Performance from Brigham Young University, Master of Music degrees in Trumpet Performance and Chamber Music from the University of Michigan, and a Doctor of Musical Arts in Trumpet Performance from the University of Michigan. He is an endorsing artist for Bach trumpets.

Steven Harlos enjoys a richly varied musical life. His teachers have included Martha Massena, Walter Robert, Peter Katin and Jean Barr on piano, and John Davison, Bernhard Heiden and Morten Lauridsen in composition. Harlos has performed at Carnegie Hall, Lincoln Center and at the Kennedy Center for the Performing Arts in Washington D.C. He frequently performs as soloist with the Dallas Symphony Orchestra. In 2010, he premiered Dysfunctional, a concerto for piano and orchestra written for him by Stephen Anderson. As a collaborative pianist, he has shared the stage with various musical luminaries, such as Timofei Dokschutzer, Harvey Phillips, Gervase de Peyer, Erick Friedman, Marvin Gaye, Dianne Warwick, Chaka Khan, Sylvia McNair, Buddy DeFranco and Byron Stripling. He worked closely with jazz pianist Dick Hyman on several projects, including Hymans ballet The Bums Rush for Twyla Tharp at the Kennedy Center, and Piano Man with the Cleveland Ballet. His compositions include two published sonatas, Sonata Rubata for flute and piano, and Benniana, a jazz sonata for clarinet and piano. He currently serves as chair of the Division of Keyboard Studies at the University of North Texas, and as keyboardist for the Dallas Symphony Orchestra.

Jason Bergman has a formidable technique and handles the [Daugherty] work with apparent ease. [The McKee work] makes a very fine encore, putting the instrument and its player through all sorts of demands and contortions, all of which Bergman handles with aplomb... Bergman switches to flugelhorn  which he also plays very adeptly  for two movements of Daughertys work and one of Peaslees... Steven Harlos provides fine piano backup throughout, switching to celeste and creating a particularly unusual sound combination in the third movement of Plogs sonata... this is a recording for fans of fine trumpet playing, which Bergman offers throughout. - Mark J. Estren, InfoDad (March 2017)

Artistic Quality: 10 | Sound Quality: 10 - contemporary trumpet repertoire is more extensive and wide ranging than youd expect. Fortunately trumpet virtuoso extraordinaire Jason Bergman is the kind of musician who believes in new music, champions it, and performs it beautifully, beyond belief... Back in 2013 Bergman made an excellent disc for MSR of world-premiere recordings of new trumpet works. This follow-up collection, also of world-premieres, may even be better... the works are uniformly communicative, imaginative, and accessible, as well as skillfully crafted. [Catalonia] stands out for its slow movements long arching lines and for the way in which Bergman effortlessly controls legato in widely spaced intervals... Daniel Schnyders one-movement sonata fuses rapid rhythmic momentum with moments of brooding slow motion that showcase Bergmans mellifluous mastery of the mute (forgive the alliteration!)... For boldness and range, however, the CDs title selection, Michael Daughertys four-movement The Lightning Fields, holds most appeal... Bergman and his trusty collaborator, pianist Steven Harlos, give specific tonal and rhythmic character to Daughertys mood shifts. They never just play the notes, and that goes for all of the works on this superbly engineered disc. Its a first-class production in every respect. - Jed Distler, Classics Today (February 2017)