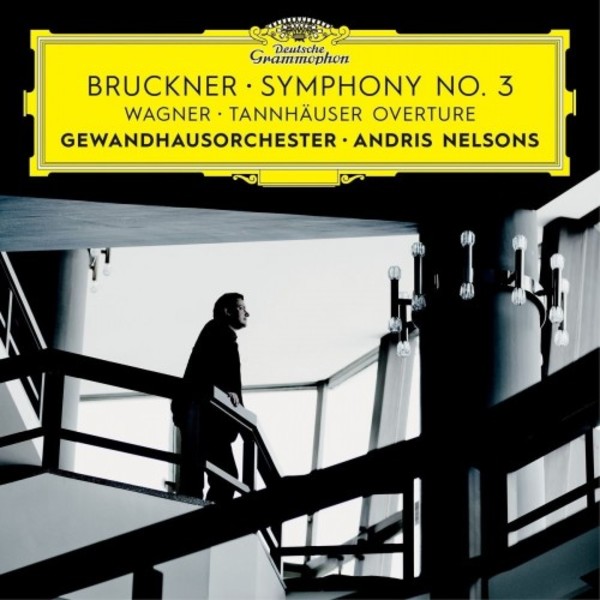 Anton Bruckner clearly had great admiration for the music of Richard Wagner, and his Third Symphony was dedicated to him. By including selected instrumental works by Wagner in his Bruckner Symphony Cycle, Andris Nelsons wants to demonstrate the influences but more importantly their differences, for clearly the two men could not have been more disparate in character.

Andris Nelsons brings youthful energy, fluidity and rhythmic impulse, while still leaving room for Bruckners musics monumental sound blocks which gives these works a new flavor. Nelsons regards the Symphony No.3 as the symphony in which Bruckner truly established his own language:

Its premiere in Vienna was a disaster, and Bruckner suffered a lot because of it. Yet in many ways he was ahead of his time and much misunderstood. () You must kill your ego to perform Bruckner, () he does not convey one truth, but rather compels the listener to follow his mystical path  a pilgrimage of sorts that will bring him closer to God.

Andris Nelsons is Music Director of the Boston Symphony Orchestra and is the designated Gewandhauskapellmeister of the Gewandhausorchester Leipzig, with the appointment commencing in the 2017/18 season. With these positions, and in leading a pioneering alliance between these two esteemed institutions, two times Grammy Award winning Nelsons is firmly underlined as one of the most renowned and innovative conductors on the international scene today.

Since 2016 Andris Nelsons is a Deutsche Grammophon exclusive artist. Now, with his new orchestra, Nelsons is embarking on a long-term journey exploring the sound-world of Anton Bruckners iconic symphonies.

This new and ambitious long-term recording project is consciously combined with the production of DGs first complete Shostakovich cycle that Andris Nelsons is recording with Boston Symphony and that has already been awarded with two consecutive Grammy Awards plus various other awards.

For his first recording as music director of the Leipzig Gewandhausorchester  indeed, his first ever with the orchestra  Andris Nelsons launches a new Bruckner cycle with the mighty Third Symphony. Its a textually problematic, much-revised work that exists in as many as six versions, although essentially these boil down to three: the original 1873 version, replete with Wagnerian references; the 1877 revision conducted by Bruckner at the symphonys disastrous Viennese premiere; and the final, heavily truncated and re-scored version of 1889 which eventually won over the Viennese public. For many years, the 1889 version was the choice of most distinguished Brucknerians, from Jochum, Böhm and Karajan to Wand and Sanderling, but in recent times it has fallen into disfavour, with many conductors now preferring Bruckners visionary but rough-hewn first thoughts. However, as Tom Service pointed out in a recent edition of BBC Radio 3s Building a Library, the crucial thing is not which edition to play but that, whichever is chosen, it be performed with musical conviction.

Nelsons bucks recent trends by opting for the 1889 version of the Third, and he leads a performance of commitment, blazing intensity and, most evidently, huge love. This is a generous, big-hearted account, aided by a warm but focused live recording with enviable dynamic range, and orchestral playing of unmatched, all-embracing grandeur. Daring to take the opening movements tempo indication  Mehr langsam, Misterioso (More slowly, mysteriously)  at face value, Nelsons conducts one of the slower accounts of this movement on record, though mercifully not as extreme as Celibidaches reading with the Munich Philharmonic. Its an approach that here pays rich dividends, for it allows the Gewandhausorchester the space to reveal its astonishing depth of tone and sonic heft, qualities equalled only by the Berlin Philharmonic and the Lucerne Festival Orchestra. And it also allows Nelsons to give what is surely the most lovingly shaped and textured performance of the gorgeous second subject on record, with every musical strand clear and tangible. Karl Böhm used to say that there is one passage in every movement that determines the tempo of the whole, and for Nelsons this Gesangsthema is clearly it.

After the powerful conclusion of the first movement, the Adagio comes initially as an oasis of tranquillity and tenderness, with silken strings, tart oboes and burnished horns in particular excelling themselves. The remaining Wagnerian palimpsests  including fleeting references to Tristan  are beautifully observed, and the final climax is surely paced, deftly balanced and emotionally overwhelming. The third movement, though not as wild as some (the tempo indication is Ziemlich schnell, i.e. fairly fast), is still both thrilling and danceable, with some wonderful, seldom-heard details brought out in the Ländler-like Trio.

The heavily abridged final movement has always been the 1889 versions Achilles heel, but Nelsons and his players throw themselves into it with tremendous conviction. The famous second subject, combining a dance-hall polka with a solemn brass chorale, is beautifully posed, the unlikely elements reconciled and melded rather than held in relief. As Bruckners formal plan unravels, the intensity of the performance palpably increases, and the warmth, power and sheer excitement of the playing leads to a noble, monumental conclusion. This is a richly satisfying performance to set alongside the thrillingly volatile Jochum (DG), marvellously idiomatic Bòhm (Decca), and emotionally involving Tennstedt (Profil) as one of the great performances of the 1889 score. If the rest of Nelsons Bruckner cycle is of this quality, it will be a fascinating journey.

And, to cap it all, theres a splendid account of Wagners Tannhäuser Overture from the same concert as a bonus. The opera itself played an important part in the young Nelsons musical awakening, and the Overture is treated here to a performance every bit as loving and thrilling as the Bruckner, combining nobility, élan and lively detail. It makes an ideal coupling for Bruckners Wagner Symphony, and perfectly rounds off an exceptional disc.