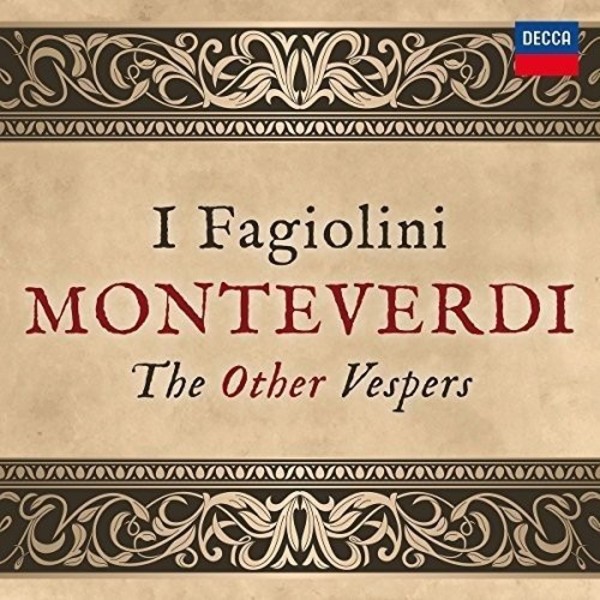 Monteverdi - The Other Vespers

Forming a response to Monteverdis timeless masterpiece Vespro della Beata Vergine (1610), these Other Vespers are centred around works from the end of his life, in 1640, following 23 years as maestro at St Marks Venice, including the celebrated Beatus vir.

A truly Venetian Vespers, arranged in a setting that could have been performed in Venice in Monteverdis time, with his sacred choral works alongside music of his contemporaries, culminating in Giovanni Gabrielis powerful and moving Magnificat in 14 parts for three separate choirs.

The release coincides with I Fagiolinis 30th anniversary: the ensemble has always enjoyed a close association with Monteverdi. Robert Hollingworth is a Monteverdi specialist.

This is an authentic take on the repertoire, including the incredible soundworld of the cornetto muto alongside four male voices of I Fagiolini in the Palestrina/Bovicelli Ave verum corpus - the first recording of such a reconstruction.

The works on this album are treated as an authentic Vespers setting, with antiphons, collects and other short excerpts between each work.

Recorded during chilly November conditions at St Georges Church, Chesterton, there is plenty of warmth and animation in the superb music-making. I Fagiolinis consort and solo singing are exemplary, and on a few occasions fuller choral moments are bolstered by eight talented students from The 24 (Hollingworths recently founded chamber choir at the University of York). ... I Fagiolini were never going to offer anything mundane for the composers 450th birthday celebrations, and this other Vespers contributes fresh ideas about how to interpret music about which plenty of matters are far from settled, in addition to being a fine advocacy of Monteverdis later Venetian-period sacred works.  David Vickers (Recording of the Month)
Gramophone July 2017